It was 35 years ago last month – November 11, 1987 – when U2 staged a free and seemingly impromptu concert at Justin Herman Plaza (now Embarcadero Plaza). When it was announced on local radio, word quickly spread; an estimated 20,000 people showed up. What they witnessed was part rock concert, part staged photo-op, part vandalism.

By 1987, U2 was no stranger to the Bay Area. Between 1981 and December 1984, the band performed in San Francisco at least six times, with shows at the Old Waldorf, Warfield Theatre and the Civic Auditorium. For two nights in 1985 and one again in April 1987, U2 staged concerts at the Cow Palace. And then in November ‘87 – midway through its tour in support of The Joshua Tree – the band turned up in downtown San Francisco for an unscheduled midday performance, just a few days ahead of a two-night engagement at the Oakland Coliseum.

The most memorable moment of the covers-heavy set would come near its end. For the last song of that 45-minute “Save the Yuppies” show in Justin Herman Plaza, U2 played “Pride (In the Name of Love).” Mid-song, Bono disappeared from the stage, leaving the other musicians to vamp somewhat listlessly. Seconds later, he reappeared atop a nearby and conveniently-placed ladder. He climbed onto the modernist Vaillancourt Fountain, whipped out a can of spray paint, and – presumably striking a blow for edginess and/or freedom of expression – defaced the public art installation with the slogan “Rock ‘n’ Roll Stops the Traffic.” (Sources differ as to whether Bono knew of a 1971 graffiti incident at the Vaillancourt Fountain in which a political slogan, “Quebec libre,” was spray painted on the structure.) 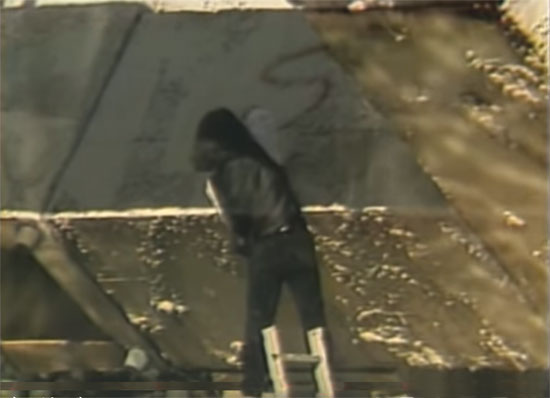 Standing back to behold the fruits of his vandalism, Bono retrieved a microphone, emitted a self-satisfied “Yep” and proceeded to lead the crowd in a “whoa-oh-a-ho” singalong. Only then did he climb back down his ladder and rejoin the band onstage. After a couple more self-congratulatory remarks, the rock messiah/graffiti artist thanked the audience and returned to singing about the assassination of Dr. Martin Luther King, Jr.

Not at all coincidentally, a documentary film crew happened to be on hand to capture Bono’s grandstanding on celluloid; the scene would be immortalized in the band’s 1988 concert film/hagiography Rattle and Hum. Notwithstanding all of U2’s undeniable musical appeal, that film helped fuel the (unforgettable) fire of a U2 backlash, one asserting that the band – and its vocalist in particular – took itself far too seriously. (This was even before Bono became a ubiquitous talking head in music documentaries, holding forth in his presumed role as spokesman for a generation).

There’s no denying that the crowd loved the Justin Herman Plaza set, though. Meanwhile, Bono’s act of vandalism set off a predictable furor, one that figured prominently in local news headlines, talk radio discourse and watercooler chit-chat. Though the singer was cited for “malicious mischief,” San Francisco D.A. Arlo Smith declined to press charges. Bono apologized: “It was dumb,” he admitted at a press conference. But that didn’t stop U2 from featuring the footage prominently in Rattle and Hum.