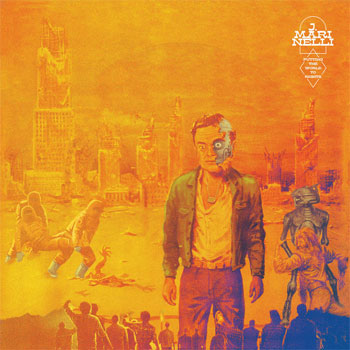 Combine equal parts stripped-down punk and acoustic guitar troubadour vibe, and add a spash of honky-tonk c&won a few tracks, and the result might be something like J. Marinelli. Born in West Virginia coal mining country and (I believe) now based in Trondheim. Norway, Marinelli is a one-man band that doesn’t pretend to be anything else. On Putting the World to Rights, he sings his simple yet hooky songs in an unaffected, impassioned we-mean-it-man style. There are few overdubs here; the album is very much of an audio verité character, and that suits the songs perfectly.

The song sequencing might be called into question: while the album starts tentatively, the songs really do get better and better as they go along. “Are You Terrified?” features some well-placed if subtle vocal harmonies, and “Hate Your Freedom” shows that despite a punk aesthetic, Marinelli is an accomplished musician with some really good arrangement ideas. “Where They’d Have Us” has some peppy handclaps, giving the music a cmapfire singalong quality that only adds to its appeal. Throughout, Marinelli sounds as if he’s in your living room with a bit of gear, singing his songs for you and a few of your pals. He’s a volume dealer, too: the record serves up fifteen songs in 36 minutes. Recommended.