Carrie Newcomer: “We can do this together.” 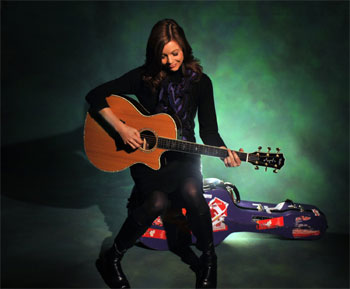 Singer, songwriter, musician, author, poet, educator, activist. Those are just some of the ways to describe Carrie Newcomer. With 20 solo albums to her credit – including her latest release Until Now – the Michigan-born artist engages in myriad creative endeavors. And they’re all in line with her deeply-held beliefs about the importance of human connections.

Inspired and informed by what Newcomer calls the “great disruption” that defined 2020 and beyond – pandemic, civil unrest and widespread division – Until Now is designed in part as a palliative response, a mediation on ways to move forward. “We’ve been living in a time that felt outside of time,” Newcomer observes.

The first lyric line of the album’s first song, “A Long Way Up” opens with the phrase, “sharing the great unraveling.” And Newcomer acknowledges that these times are tough for nearly everyone. “But in great disruption is the possibility of change, of even transformation,” she insists. “Sometimes human beings can get stuck in our ways. There’s a wheel that’s turning in our society and in our lives, and we just kind of go along with it until something big disrupts it.”

And that disruption can provide an opportunity to take stock, to as ourselves important questions. Newcomer mentions a few questions that she has posed to herself. “Where are the holes in our social safety net? What might I do differently in my personal life? What can I let go of? What do I really want to embrace in my life? What matters? What doesn’t really matter at all?” Until Now is a musical and lyrical exploration of those and other big ideas.

But a record album – even one as richly expressive as Newcomer’s 20th release – isn’t enough to communicate everything that the artist has on her mind. Concurrent with the album’s release, Newcomer presented Until Now: New Poems, the third book of poetry from this prolific individual.

She thinks of her poetry as distinct from her song lyrics. “I write a lot of poems and short stories and character studies, and often my songs will start from those writings,” she explains. “But sometimes a poem is a poem, and it wasn’t meant to be a song.” Other times, her poems are a step on the journey toward a song. “I don’t always know when I start to write whether a particular piece of poetry will become a song, or it will be a poem,” she admins. “But it becomes clear when I finish.”

Newcomer emphasizes that there’s no one-size-fits-all approach to creativity. She says that when she teaches songwriting workshops, she shares this with those gathered: “If you line up ten songwriters and ask them their [creative] process, they’ll give you 14 ways.”

A highlight of Carrie Newcomer’s 2016 album The Beautiful Not Yet is the song “You Can Do This Hard Thing.” That tune has taken on new meaning during the pandemic. When her concert tour schedule was upended by the Covid-19 pandemic, she sought ways to respond to the new challenges. “I was home and looking at how everyone was trying to negotiate a moment of great change,” she says. The song – a signature tune of hers – seemed especially apropos for the times. So Newcomer threw out a suggestion on her Facebook page.

“‘Hey everybody,” she recalls announcing. “Just put earphones in, sing to this song, and send me the video. I’m going to do a community project where all of us sing to one another!” The response was overwhelming. “I started getting all these videos, and they were wonderful,” Newcomer says. Drawing on her art school background, she edited together a video using as many of the crowd-sourced clips as possible.

The video looks a bit like a Zoom conference, featuring people of all ages, all walks of life. Some are at their computers, wearing headsets and singing along. One is reciting the lyrics in sign language. Most are individuals, but a few have entire families huddled together. A few hold their pets. “In just about every section of the video there’s something really touching,” Newcomer says. The simple beauty of the song and the heartfelt participation of scores of people all but guarantees that the viewer will be in tears within the first minute. “It was so generous of [the participants] to let me know the song landed well and safely in their hearts,” Newcomer says.

“It was just astounding, touching, intimate, fun, funny, and heartfelt,” she says. “There were many times in the creation of it that would make me a little teary: ‘Oh gosh, people are amazing!’” The finished video was shared on Facebook. “It was helpful for me to have this community of folks saying, ‘We can do this, and we can do this together,’” Newcomer says. “Because we really are all in this together.”

As facile as Carrie Newcomer is with turns of phrase that get to the heart of her big thoughts, to explain her fundamental goal as a poet and songwriter, she reaches for a quote from one of her favorite environmental writer. “Terry Tempest Williams said, ‘Finding beauty in a broken world is creating beauty in the world we find.’ And that’s really my approach.”