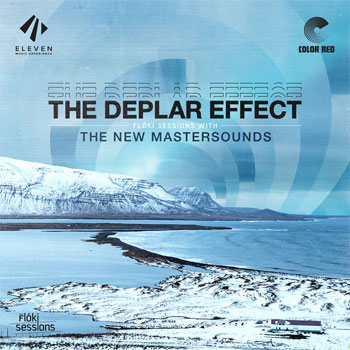 For more than two decades now, The New Mastersounds have been creating and refining their winning brand of fusion/funk/what-have-you. Right out of the gate, the result of their creative endeavors was impressive indeed. Their debut long-player, Keb Darge Presents The New Mastersounds (re-released on vinyl in 2021 and reviewed here) was a solid offering, but with the benefit of hindsight, it didn’t represent a full display of the group’s musical riches. Yet it certainly hinted in that direction.

Subsequent albums got it right, though, and all are essential. Of particular interest is a 2006 release, Live at La Cova; it captures the group onstage. As consistently superb as their studio work is, it’s in front of an audience, in real-time, where the quartet truly shines. For that reason, I named Live at La Cova one of 2006’s best releases, right alongside albums from Flaming Lips and The Residents.

In 2011, the group – which had been primarily instrumental to that point – released Breaks from the Border, an album that featured all four members on vocals. Kudos were due not only for that boundary-pushing approach, but also for the quality of the record itself. For while The New Mastersounds had often backed other vocalists (like Corinne Rae Bailey) and/or featured guest singers, taking on the vocals themselves was a gutsy move for a group that built its reputation as an instro outfit.

Therapy from 2014 saw The New Mastersounds sprinkling some trip-hop textures into the mix, with pleasing results. 2015’s Made for Pleasure added brass, another expansion of the band’s musical vision, and another one that made sense. The record also continued on with the guest-vocal approach. In 2016 the band released a limited-edition vinyl-only set, The Nashville Session; it saw The New Mastersounds returning to their instrumental roots; this live-in-the-studio collection is a thrilling, spirited must-hear.

Seemingly never content to do the same thing twice in a row, for 2019’s Shake It saw the group adding vocalist Lamar Williams Jr. to the group (as opposed to guesting). At the time I considered the album The New Mastersounds’ most effective integration of a singer into its sound.

That’s no longer the case. With the release of The Deplar Effect, The New Mastersounds have once again done the unlikely: they’ve successfully tinkered with their character while staying on a consistent musical path. Indeed, they’re having it both ways here. Williams assertively takes the vocal on six of the album’s 13 tunes. And he fits in so well that first-time listeners might well assume he’s been with the group since Day One.

The tasteful, tasty and thrilling interplay between Eddie Roberts’ sinewy guitar licks, Joe Tatton’s soulful C3 work and the peerless groove of rhythm section of Pete Shand (bass) and drummer Simon Allen is a highlight of every single track on The Deplar Effect. The groove is there, the accessible melodies are at the core, and the blazing simpatico of four musicians at the top of their collective game shines through from start to finish. And when Williams takes the mic, the excitement soars to yet another level; imagine a cross between Seal, Stax and the best Northern Soul you’ve ever experienced.

True, Williams does sing “Everything I do or say / is only gonna get in my way.” But the truth is that everything The New Mastersounds do makes them an even better group, and each successive release achieves the near-impossible: it improves upon what has come before.

If The Deplar Effect – recorded in Iceland, of all places – wasn’t already a must-have, it’s even better thanks to the band’s commitment to releasing it as a both a CD and a fantastic vinyl double-LP. As wowed as I’ve been by most everything from this band, The Deplar Effect is peak New Mastersounds. It’s no overstatement to call their (I think) 17th album their best yet.

NOTE: If you’ve read this far, you may also enjoy my interviews with The New Mastersounds from 2010, 2016 and yet a second time in 2016, as well as reviews of guitarist/producer Eddie Roberts’ splendid solo album It’s About Time (2013) and his 2021 supergroup turn with WRD, The Hit.