Though Raised on Radio spawned hit singles, on the whole it was less well-received critically. In the wake of that disappointment, and in the face of changing popular tastes, Journey went on hiatus for nearly eight years.

When the band regrouped, Perry was again its dominant force. The brief reunion included former members Smith and Valory alongside Schon and Cain, but health problems eventually sidelined Perry. By 1998 Journey’s most well-known member announced his exit from the group.

Many bands have folded in the wake of the departure of their lead singer. It’s difficult, for example, to imagine The Who continuing without Roger Daltrey. Imagine a Mick Jagger-less Rolling Stones. Yet it’s not without precedent for a band to continue with a new lead vocalist. And that’s precisely what Journey – now effectively co-led by Schon and Cain – did. The group brought in Steve Augeri, a relative unknown who had worked with Michael Schenker. 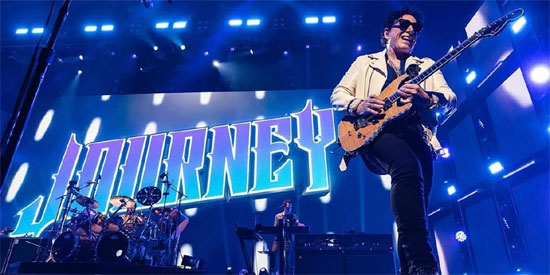 Augeri took an active role in songwriting and handled lead vocals on a pair of Journey albums: Arrival (2000), 2005’s Generations and the band’s only EP, Red 13. None sold in quantities remotely resembling the band’s peak ‘80s period. And vocal problems necessitated Augeri’s leaving the group in 2005.

Former Yngwie Malmsteen singer Jeff Scott Soto was brought in as a replacement, but his tenure was short, and Soto did not record with Journey. Schon admires Soto as a vocalist but says that ultimately he wasn’t a good fit, lacking “the tenor-alto-soprano voice you need to be able to cover the [Journey] catalog.”

After Soto’s departure, Neal Schon again sought a new lead singer for the band. In February 2008, Philippines-born Arnel Pineda became Journey’s sixth lead singer. A powerful vocalist, Pineda was a YouTube sensation long before he joined the long-running band. With Pineda on board joining Valory and drummer Deen Castronovo – and with Schon and Cain as primary songwriters – Journey returned to the charts. Released in 2008, the aptly-named Revelation was a collection of new material plus re-recorded versions of Journey hits, this time with Pineda on vocals. The self-released album sold more than one million units.

But that level of success would prove difficult to sustain. While 2011’s Eclipse performed well on the album charts, none of its three singles charted. In retrospect, Journey’s reign on the singles charts would seem to have ended back in the mid 1990s. Pivoting, the resilient band turned its attention to live work, releasing a string of concert albums and DVDs. Journey would release no new studio material between 2012 and 2021.

Meanwhile, the lineup changes that had been a characteristic of the group’s past would return, marked by frequent additions, dismissals and departures. Valory and Smith – both of whom were on hand when Journey was inducted into the Rock and Roll Hall of Fame in 2017 – were fired in 2020; a flurry of lawsuits ensued. “The cool thing about the name Journey – and the brand Journey – is that the name means you’re always evolving,” Schon says. “It’s okay to make changes.”

2022 marks Pineda’s 15th consecutive year in Journey; he’s long since surpassed Steve Perry’s total of 12 years fronting the group. And the band’s long studio silence was broken with a 2021 album, Freedom. Intentionally or not, Cain’s keyboard textures on the new release echo the group’s ‘80s sound. And Pineda remains what he’s been for many years now: an effective ringer who can render faithful readings of the classic Journey tunes.

Neal Schon is as compelling and tuneful an axeman as he’s ever been. Thanks to his skills, unlike many popular groups, Journey has never really needed a second guitarist. Schon believes that through all of the changes Journey has endured, as the sole remaining original member he represents the through-line that ties it all together. “To be frank about it,” Schon says, “it’s my guitar playing. I’ve still got the fire; I’ve still got the chops.”

He’s right. Though they’re subtle, echoes of the prog-fusion era band are in there on Freedom, if one listens closely and past the studio sheen. “You never quite leave things behind,” Schon admits.
And he’s looking toward the future. “Everything just keeps on going straight up,” Schon says, passion and determination in his voice. “We keep attaining younger audiences: We have five generations of audiences out there right now. I’ll look in the front row, and they’re teenagers, and they’re singing every song at the top of their lungs.”

After a period marked by gigs in more intimate venues, Journey seems poised to return to the big time. “We went back into arenas shortly after Lollapalooza this year,” he says. “And we’ve started selling out arenas again. Now, we’re going to do the same thing at the beginning of next year. We’ve got the first 40 dates booked.”

Journey should be celebrating its half-century of music in 2023. That might not happen, and the reason is actually good news. “We already have 2023 and ‘24 planned out,” says Schon. So a 50th anniversary celebration may have to wait a bit. “I think,” says the guitarist with a hearty laugh, “it’s going to take a couple more years.”

And nobody really knows what changes might be in store for Journey between now and then, let alone in the years to follow. It’s all okay, though, because as Neal Schon reminds us, “bands evolve.”