The Freeway Jubilee: Always in Motion

Launched in 2015, The Freeway Revival crafts original uptempo, soulful Southern rock for enthusiastic audiences. And the Asheville-based group builds on the proud tradition of soaring collectives like Delaney & Bonnie and Friends or – a more contemporary reference – Tedeschi Trucks Band. Bassist and songwriter Kenny Crowley spoke with Bold Life between gigs and amid continued work on a followup to On the Horizon Volume One, the Freeway Jubilee’s fourth and latest release. 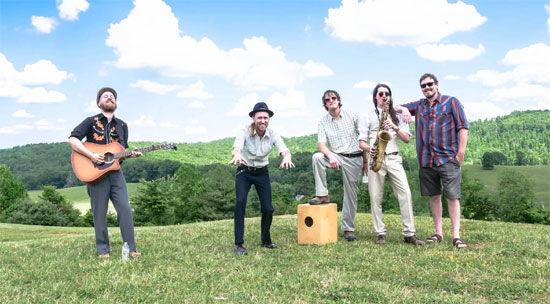 All of the musicians in The Freeway Jubilee have the technical skill to go the jam band route, but you don’t; instead you focus tightly on songs. Was that a conscious decision from the start?

We love to jam, but we want it to be evident that we are a songwriting, song-crafting band. It’s a challenge to figure out where you fit into the music scene. And The nice part about the jam band scene is that it’s a bit ambiguous: you don’t necessarily have to define your genre. But still, I don’t know that we fit fully into that scene.

Vocal harmonies are at the core of what the band does. Was that part of the original concept, or was it more of a case that you all got together and then discovered, “’Hey, we can actually do this”?

When I joined the band, my initial meetup was with twin brothers Adam and Jonathan [Clayton]. The first time we ever got together, we sang a couple songs together, and the vocal harmonies were just right there immediately. So we were like, “Well, I’m sold. Let’s do this!” The vocals are really the founding element of the band.

What is the relationship between The Freeway Jubilee’s studio work and live performance?

Live performances are definitely our bread and butter; that’s where we find most of the joy that comes with making music, with the energetic experience shared with the crowd.

And a lot of our songs are “road tested.” If we have a new song, we like to play it live for a while to get the crowd response, feel the energy of it and [learn] where it could be tuned up to be better. Then, when we get to take those feelings and ideas into the studio and craft a song – that’s when things really get tightened up.

And then the studio experience informs the live experience again, after we’ve [recorded].

The title of your latest album, On the Horizon Volume 1 suggests that there will be a sequel. What can you tell me about that?

We have all put blood, sweat, and tears into [writing] for the past couple years as a unit. And there are more songs than we could fit on one album. So Volume 2 is what we’ve been working on. And we’ll continue to work into the winter when we have a little more free time. We’ve been pretty busy with three of us band members getting married this year. So look for Volume 2 probably at some point in 2023.