An Asheville tradition for more than 20 years, the Halloween Cover Show brings together local music artists and music lovers for a night of community and familiar tunes. And it’s done in support of an underserved, marginalized part of society: incarcerated people.

This year’s event was held Friday, Oct. 28 at 7 p.m.; the secret location was set to be revealed via Instagram (@avl.halloween.cover.show) a few days prior. 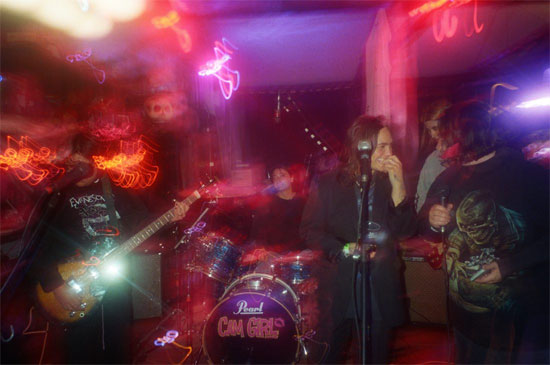 All funds raised from this year’s annual Halloween Cover Show will go to support the work of two locally based advocacy groups, Tranzmission Prison Project and Asheville Prison Books. Both organizations launched in the early 2000s, aiming to provide free books to incarcerated people. APB serves the Carolinas, and TPP mails books and literature to incarcerated LGBTQ+ people nationwide, explains Riley Carter, a volunteer with TPP since 2015.

About 30 volunteers are involved locally, and Carter emphasizes that while both organizations are “connected to a wider network of prison books programs,” those links are informal. Neither organization is a registered 501(c)3. “As a bunch of anarchists, we aren’t the most concerned with the money or status of the project,” Carter says. “We just want to send out books to prisoners until every cage is emptied.”

Carter believes that the work of TPP and APB is a radical act “because it resists the alienation and isolation perpetuated by prisons.” And he believes that the prison system is hostile to his group’s mission. “This is not easy work,” he says. “But with every package we send to our community behind bars, we’re succeeding in our goals.”

The two organizations have sent many thousands of packages to incarcerated people, Carter says. And many prisoners send letters of thanks in return. “Those thank-you letters are some of my most prized possessions,” he says. “They let me know that we are succeeding and that we have to keep going.”

The Halloween Cover Show is a way to support the efforts of these organizations while having fun. Carter says that he has been attending every year since 2013. “And I had the pleasure and honor of organizing the show in 2011,” he says. “We raised upwards of $6,000.”

At press time, Carter was keeping the lineup for this year’s show under wraps. “We try to get a good mix on the bill; nothing too obscure,” he says. But he did provide some hints. “You can expect to [hear bands performing covers of] Korn, Judas Priest, Britney Spears and The Specials,” he says. In other cities, Carter continues, similar events focus on punk. But the Asheville tradition “ends up landing in a swirl of irony and sincerity.”

Sponsored by Pansy Collective, this year’s event promises to be unique and eclectic. “You can expect food, a raffle, community safety volunteers, a photo booth by DIYabled, a costume contest and DJs,” Carter promises, calling the event “a completely DIY immersive Halloween experience.”