In recent years, tribute bands have become a growing sector on the live music landscape. Some focus specifically on the music and visuals of one act, while others seek to re-create the vibe of a particular time. It’s the latter approach that forms the foundational concept of Asheville-based LazrLuvr, a seven-piece group featuring well-known local and regional musicians.

Vocalist Raphael Morales developed the LazrLuvr concept with drummer Sam Frame. “From inception, the idea was to make a massive supergroup that brought people from the community together in the wake of the isolation and separation we all felt during COVID,” Morales explains. “We wanted to create a unique ensemble piece that brought something to the table for everyone, performing iconic songs that people couldn’t find in a live setting anywhere else in our region.” 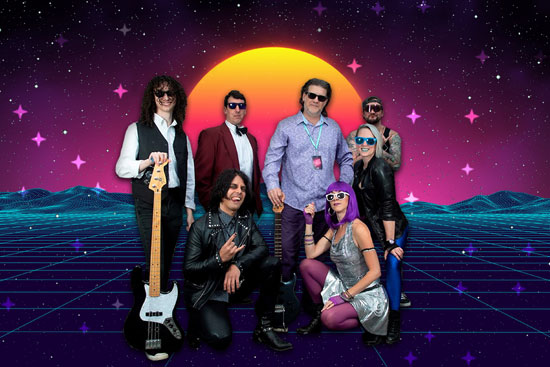 LazrLuvr combines visuals inspired by modern-day synthwave artists and applies it to a nostalgia-filled set list that surveys the ’80s pop landscape. The five core musicians — Morales and Frame plus guitarist Eric Congdon, keyboardist Brad Curtioff and bassist Walker Astin — had never been in a room together before starting the group, Morales says. But once they ran through four representative songs by classic artists of the era — Alan Parsons Project, Van Halen, Bon Jovi and Loverboy — Morales says that “every light bulb we had turned on.” The success of ’80s throwback series “Stranger Things” influenced the group’s setlist as well.

The original concept focused on fashion. “Initially, it was going to be more Lycra than band,” Morales admits with a laugh. “But once we realized the scope of talent, we knew it would be so much more than that.” Morales says that LazrLuvr strives to avoid being genre-specific. “I wanted to be more decade-oriented,” he explains. That meant adding two vocalists, Fancy Marie and Hope Griffin. “Now we’re beyond fortunate to have a powerhouse vocal block,” he says. At present, Morales says that the group’s repertoire features “about six hours of music.”

Morales notes that a key to LazLuvr’s appeal is the “collaborative selflessness” of the group members, most of whom have worked fronting other bands. “LazrLuvr is a wild ride without a lot of room for ego,” he says. “We all share that space equally.” And visuals — props and costumes — remain central to the LazrLuvr aesthetic, as Morales and fellow members pour hours into their onstage get-up.

LazrLuvr is already booking well into next year, and Morales says that the group’s collective goal is to “stay fresh, adapt to demand and bring as much joy to the world as possible.” The costume-mandatory Masquerade Ball is technically sold out, but Morales emphasizes that 35 tickets have been held back for sale at the door. The event includes a Victorian-style dinner, bar and desserts. “And our set is going to be absolutely ridiculous,” Morales promises.