Let’s Do the Time Warp (Yet) Again

The Rocky Horror Picture Show was a box office failure on its 1975 release, but a groundswell of fanatic moviegoers eventually helped the film take its rightful place as a pop culture classic. The campy musical turned horror movie tropes on their head, introducing themes like androgyny into mainstream culture. And audiences’ participatory reaction to the film kick-started the cosplay concept.

As Rocky Horror heads toward its 50th anniversary, the musical shows no signs of losing its appeal. And Asheville is the perfect locale to stage another revival of the musical. The Rocky Horror Music Show took place Friday, Oct. 21 at The Grey Eagle in Asheville. 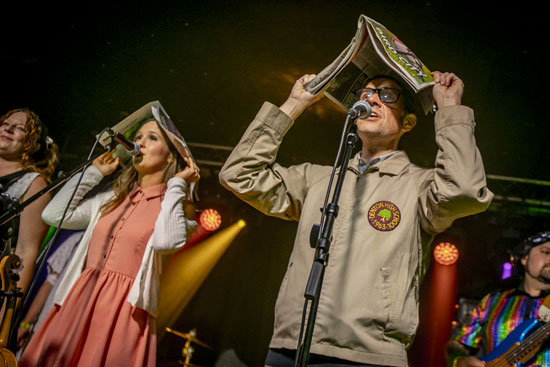 Drummer Courtney Cahill is spearheading the project, but he doesn’t consider the Asheville-based Rocky Horror a revival at all. “It’s a very unique staging of the material,” he asserts. “There are hundreds of ‘shadow casts’ that engage with the movie on screen, and theater companies that put on the musical, but we present it as a total rock show.”

The local production began in 2021 with a pair of shows, and in August the cast reconvened to prepare for a run of performances this fall. Even though this Rocky Horror is a stage production, Cahill’s cast bases its music and dialogue on the 1975 film, not the original 1973 musical.

“We’re going for [the film soundtrack’s] sound,” Cahill says, “and we’re certainly trying to channel the actors from the film.” He adds that the show includes “just enough interstitial narration to stitch it together for the newbies.”

The film starred a number of high-profile actors, including Barry Bostwick and Susan Sarandon. But the most memorable roles featured Meat Loaf (as short-lived delivery boy Eddie) and Tim Curry in the role of Dr. Frank-N-Furter. The Asheville cast features saxophonist Myles Dunder and drummer Troy Crossley, respectively, in those roles.

Dunder says he has taken part in shadow casts of Rocky Horror ever since his high school days. “Rocky Horror taught me that there is nothing more beautiful than a theater full of weird people excited about the same silly thing,” he says.

The band/cast members are drawn from among Asheville’s deep-bench musical community. “We’re a group of friends who have known each other for many years in different bands,” Cahill says. “But when we first got into our underwear and corsets, we saw each other in a much different light.”

Cahill remarks upon the ways in which the show resonates with Asheville audiences. “Even though the movie is not playing, the audience is still engaging with us [as if it is].” And he notes with pride that that interactivity continues even after the final curtain falls. “After the show, people always come up and tell us what Rocky Horror did for them in their journey seeking a unique identity.”