The music of prime-era Black Sabbath has served as inspiration for countless bands, applying the drop-tuned, doom-laden style of the Birmingham, England, foursome to their own creative ends. But perhaps the most unusual band to follow in Black Sabbath’s wake is Los Angeles quartet Mac Sabbath.

The group’s sound will be familiar to many listeners: The melodies closely follow the music of Sabbath’s 1970s albums. And the group members will be eerily recognizable as well, but perhaps not in the way one might expect. Lead singer Ronald Osbourne is covered in clown makeup with a shaggy red wig and dressed in a baggy red, white and yellow suit. 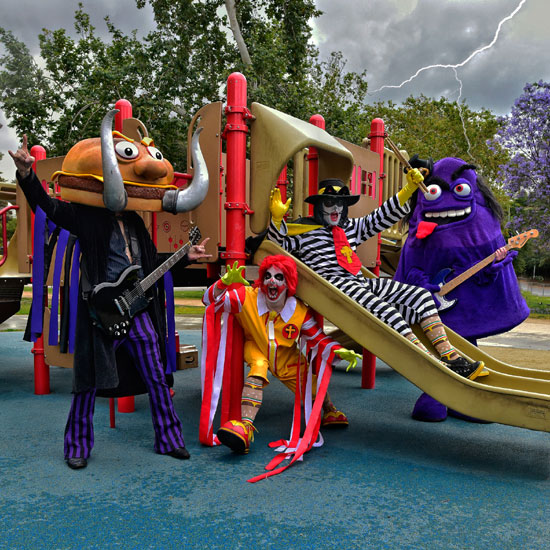 The rest of the band looks suspiciously like fast-food mascots gone wrong as well: guitarist Slayer MacCheeze sports a giant head that looks like a mass-produced cheeseburger (with horns borrowed from Spinal Tap’s stage setup). Drummer Catburglar is a cartoonish cross between Kiss drummer Peter Criss and a masked thief. Bassist Grimalice … well, you get the idea.

The band doesn’t grant interviews, and band manager Mike Odd explains why, using a not-so-subtle Black Sabbath reference: “Ronald is … paranoid,” he says. Instead, he speaks on the group’s behalf and recalls how he first got involved with the freaky foursome.

“I got this call, and the guy says, ‘You’ve got to come down to this burger franchise in Chatsworth, Calif.; it’s going to change your life.’ Odd’s reply: “Yeah, I’ll bite.”

There he encountered a costumed quartet playing Black Sabbath tunes, but their lyrics sought to launch a “dinner rock revolution,” extolling the evils of fast food, processed ingredients, multinational corporations, genetically modified organisms and the like. Odd was immediately won over and began booking the group at venues in Southern California.

Inevitably — even in a cultural landscape overrun with high-concept ideas — Mac Sabbath got noticed. “I put a thing on YouTube, and it instantly went crazy,” Odd recalls. With a mischievous smile, he notes that “Fox News was the first major outlet that picked up Mac Sabbath; they said all these awful things about them!”

It didn’t hurt, either, when Black Sabbath’s official social media posted a link to the video. In short order, Mac Sabbath was invited to perform in England at the 2015 Download Festival, sharing a bill with Kiss, Mötley Crüe and Slipknot. They even played a private party given in honor of Ozzy Osbourne.

Yet, Mac Sabbath simply cannot operate according to traditional rules of rock ‘n’ roll. Ronald’s paranoia seeps through in his between-song banter, as he rants about other bands he imagines are stealing his ideas. Odd ticks off a list: “Cinnabon Jovi, Weezer Schnitzel, Burger King Diamond, KFC/DC … even Van HaLensCrafters. And they’re not even food! How dare they!”