Taping the Grateful Dead (Part 2 of 3)

Tale of the Tapes
Rodriguez made sure to maintain an open mind while researching for the book, but he admits that he began with at least a vague thesis. “I was trying to figure out if the members of the Grateful Dead intentionally sought to reinforce [the notion] that taping was [a] good [thing],” he says.

And the answer to that question remains a bit vague. Even now Rodriguez wonders: “Was the taping phenomenon [such] a part of myth-making that it became a legacy? Or did [the Dead] not really have any control over it?”

While the Grateful Dead organization was involved in the project to the extent of allowing reproduction of specific images, no former members of the band were among Rodriguez’s list of interviewees. So he’s left to draw conclusions based on interviews with some of those who were around the band, and fellow expert Deadheads.

Rodriguez emphasizes that Grateful Dead Productions was cooperative, and he’s appreciative. Because of the multiple levels of red tape and multiple entities who had to sign off), it sometimes took him years to get clearance to include a particular image or document. And cases of flat-out “no” were rare. But there was one.

After All is Said and Done includes photos of the San Rafael tape vault and another in Nevada. And Rodriguez hoped to include a photo showing the Grateful Dead tape vault that exists at Warner Brothers Records, the group’s label from the beginning to 1973. When he asked, the answer was a “hard and fast ‘no.’” So he decided that the next best thing would be to include a reproduction of the “no” email from Warners. “I got shut down on that, too,” Rodriguez says with a wry laugh. 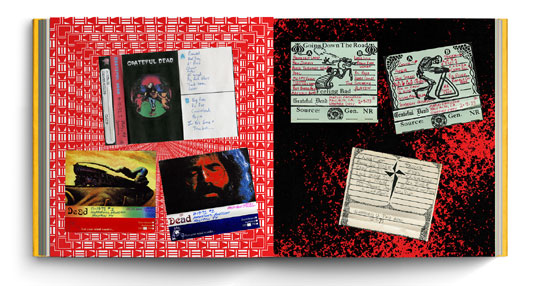 The Next Best Thing to Being There
Remarkably, Rodriguez never witnessed the Grateful Dead live on stage. “I was in elementary school when they performed last,” he admits. But he has frequently attended shows by the myriad post-Dead mutations – “Phil Lesh and Friends, RatDog and all that,” he explains – beginning in the 1990s. So for him, the tapes also serve as a way to reacquire that you-are-there vibe in the present day.

But for this expansive project, Rodriguez went straight to the source. Days before the pandemic-spawned global shutdown, he visited the official Grateful Dead Archive at the University of California, Santa Cruz. He sought to connect with the archivists and librarians there, hoping to gain access to “the documents that specifically lent themselves to the start of the official tapers section in 1984.”

He succeeded on that score, and the visit helped chart the project’s subsequent path. Rodriguez interviewed key figures connected to the Dead’s taped legacy, including Dave Lemieux, the Dead’s current archivist. He also spoke with archivist David Ganz, who was “kind of confused [as to] why I was interviewing him,” says Rodriguez with a chuckle. 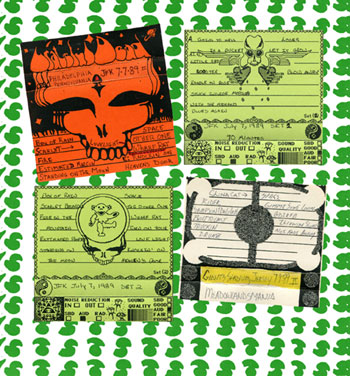 Each interview and each review of documents felt like a step forward on Rodriguez’s journey of discovery. “I took what I learned from someone – maybe based off documents I found from the archives – then found the line that would connect me to the next person,” he says. “It was an organic process, a weird detective thing. Kind of like forensics, in a way.” And the reader of After All is Said and Done experiences the journey in similar fashion: “For the most part, all the interviews are laid out chronologically as I [conducted] them,” Rodriguez says.

And while there’s a kind of linear flow to the book, Rodriguez is keenly aware of the spontaneous, free-flow mindset that is often brought to all things Dead. “I wanted the book to be this experience where you could open it to a page, maybe half-complete it, and still come away with some curiosity,” he says. “Even though you might not understand the total context.”

Some of the documents that Rodriguez uncovered are reproduced in the pages of After All is Said and Done. Readers may experience a bit of cognitive dissonance upon reading the typewritten minutes of a meeting (dated July 11, 1984). Attendees included “M. Hart, P. Lesh, B. Weir, R. Hunter, J. Garcia, Ram Rod” and two dozen others. Business meetings aren’t the first things that come to mind when one thinks of the Grateful Dead. But such documents help explain the Dead’s collective attitude toward fan taping, and the ways in which the Dead organization’s perspective on the phenomenon changed over time.