Taping the Grateful Dead (Part 1 of 3) 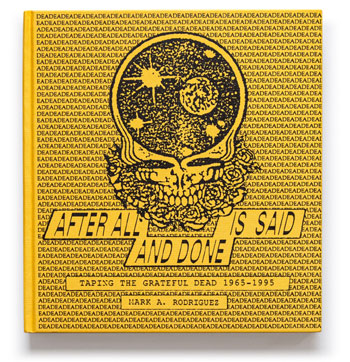 After All is Said and Done: Mark Rodriguez and Taping the Grateful Dead

But fans of the beloved Grateful Dead took the practice to a new and previously unimagined level, documenting the group’s concert history in a manner that set it wholly apart from other endeavors. At first, concert tapers worked furtively; by late in the Dead’s historical arc, tapers were acting with the tacit approval of the Grateful Dead organization.

Until now, few have endeavored to bring together the various components of this wildly popular underground tradition into a book that tells its story. But in words and images, Mark A. Rodriguez has done just that with After All is Said and Done: Taping the Grateful Dead 1965-1995.

A massive tome – nearly LP-sized, more than an inch thick and weighing in at nearly four pounds – Rodriguez’s book represents twelve years of deep, dedicated and exhaustive research. A breathtakingly impressive work, After All is Said and Done represents the kind of creative fanaticism that could only come from a Deadhead.

Loving Sculpture
The casual observer might gaze upon the hefty pale-yellow hardbound volume and see a book. But Rodriguez prefers to think of the book as merely one of several physical manifestations that make up the project.

“I work conceptually on a project-by-project basis with many different materials,” Rodriguez explains. Those materials, he says, can involve “anything related to three-dimensional space.” And he considers the work to possess a performative dimension. Rodriguez says that his decade-plus focus on the project “involved a lot of relating to people socially to collect tapes, to discuss tapes and to get certain information.”

The tapes themselves are at the heart of Rodriguez’s project. As Stuart Krimko asserts in one of the book’s many essays, Rodriguez “was struck with the Sisyphean impulse, perhaps familiar to many completist Deadheads, to acquire a copy of a tape of every show the band ever played.” Most estimates place that number somewhere in the neighborhood of two thousand recordings. Nobody knows for sure.

And as Krimko explains, since Rodriguez was already “an active artist with a conceptual bent, it wouldn’t be a mischaracterization to call the idea itself an artistic proposition.” And that’s precisely what the author of After All is Said and Done proceeds to do. 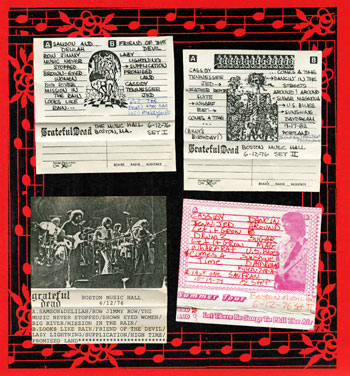 Rodriguez characterizes the result of acquiring, organizing and archiving his collection of actual live Dead tapes as a “sculpture.” Pressed to explain what the hell he’s going on about, Rodriguez defines the project as “what technically might be called a relief sculpture with an additive process.”

Further explanation is certainly required, and the author-artist patiently obliges.

Rodriguez eventually gets around to expressing his belief that several pages near the beginning of After All is Said and Done document the series of sculptures he’s endeavoring to describe. To the untrained eye, those photos look a lot like huge, wall-mounted shelving units filled with thousands upon thousands of cassette tapes, each meticulously labeled, and all placed carefully in chronological order.

There’s the music, of course: magnetic tape capturing audio documents of the Grateful Dead onstage in all their often-erratic, sometimes transcendent glory. But the history as compiled and archived by Rodriguez also places emphasis upon the project’s visual aspects.

Those visuals are not, except in a few rare cases, photos of the band. More than 150 pages of After All is Said and Done are filled with color photos of cassette j-cards – the paper sheets upon which loyal Deadheads have inscribed not only the set lists (with plenty of >’s to denote those occasions when one piece of music tumbles imperceptibly into the next) but hand-drawn artwork, fancy lettering and additional annotation.

Often the j-cards contain information relating to the tape’s generation (iterations of analog copying between the source tape and the one in hand) and the occasional personal note (e.g. “My favorite #1 show of old school Dead,” written on the j-card for a 1977 show at San Bernardino’s Swing Auditorium).

When photos are included, often as not they’re of Deadhead main man Jerry Garcia, hunched over one of his distinctive electric guitars, perhaps outfitted in some bright red knee-length shorts. Bobby Weir shows up now and again, but far more common are meticulously-drawn human skulls – lots of skulls – and roses and dancing bears plus co-opted images from pop culture (Mickey Mouse, Calvin and Hobbes, Bloom County, etc.). Taken together, these j-cards represent both the crowd-sourced character of the entire taper enterprise, and its fundamentally communitarian character.