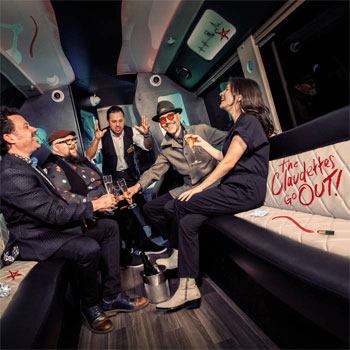 For the eclectically inclined listener, artists and groups that defy genre categorization are a delight. Certainly, such artists are the bane of record company marketing departments (to the extent that such things exist, in an era when that the burden/task of marketing has been shunted onto the artists’ list of duties) but adventurous ears welcome the unclassifiable.

Fancying myself among that population, I welcome the release of each new album from Chicago group The Claudettes. Fronted by the gentle and deeply expressive vocals of Berit Ulseth, the group makes music that doesn’t fit easily into any musical category. And The Claudettes can be counted on to deliver the unexpected.

While previous albums have showcased a rollicking, uptempo musical approach, The Claudettes Go Out! opens with the sweet and contemplative “A Lovely View.” Johnny Iguana’s grand piano and Ulseth’s charming voice are at the center of the song’s arrangement. String player Zach Verdoorn (on bass and guitar) and drummer Michael Caskey are more felt than heard until near the song’s conclusion. But even with the minimalist arrangement, it’s a work of grandeur and beauty.

“Park Bench” leans in an urbane, sophisticated pop direction, a wonderful kind of cross between Petula Clark and Joe Jackson. Jim Cooper’s lovely orchestration adds another layer to The Claudettes’ set of musical tools. “American Sky” serves up the saloon jazz-informed style that has characterized some (but of course not all) of The Claudettes’ previous work, and it’s wedded to a timeless pop tune with hints of the classic Brill Building style.

“Dozing in the Crypt” combines goth and cabaret styles, with a stomping backbeat and slashing guitar. But the song’s vibe conjures mental images of Ulseth in a glittery cocktail dress, leaning sassily on the edge of Iguana’s piano. (He’s droning menacingly on low notes all the while.) Verdoorn turns in some tasty slide guitar on the tuneful and hypnotic “Time Won’t Take Our Times Away.”

The glistening, genteel character of “The Waves” stands apart from anything we’ve heard before from The Claudettes, too. But it’s executed with style and conviction, and a haunting arrangement. The melancholy “There’s Too Much Affection in This World” is as close as the group comes to baroque pop, and they give the style their own spin.

Encountering “Exposure” may give the listener the sonic equivalent of whiplash. It owes a debt to ‘80s ska, and sounds wholly unlike anything else on the album, with rumbling machine-gun fire blasts from Verdoorn’s guitar. Vocals from Ulseth’s band mates suggest a Windy City answer to Oingo Boingo, or something.

The swaying, sultry cocktail pop of “Cowboy” transports the listener back to less manic territory. It sounds most like a single, and in a just world, a hit single. Caskey’s subtle percussion is a delight.

Johnny Iguana leads the band on an uptempo closing number, the brilliant and splashy “The Show Must Go On (And Then the Show Must End).” Ulseth delivers her vocals with a perfect balance of enthusiasm and exquisite ennui. Verdoorn tears up a majestic guitar break, and Iguana and Caskey offer spirited support.

“The last song has to be your best,” Ulseth tells us. Maybe, maybe not: All ten tracks on The Claudettes Go Out! are winners.

Read reviews of the band’s previous albums and more at this link.