Home  »  blues • interview • new release   »   Solomon Hicks: Genres Are Made to Be Broken

Solomon Hicks: Genres Are Made to Be Broken

Blues guitarist and songwriter Solomon Hicks has a simple and straightforward perspective on music. “I like songs and music that make people feel good,” he says. “Anything that has strong beats, a good firm groove… and lots of guitar.”

A key part of Hicks’ unique take on the blues is his upbringing; unlike some of today’s blues stars, he didn’t come up immersed in an exclusively blues culture. “People like [Christone] Kingfish [Ingram], Jontavious Willis, players born in Clarksdale or Georgia, they grew up with that sound,” he points out. Born and raised in New York City’s Harlem neighborhood, Hicks developed a different sensibility. 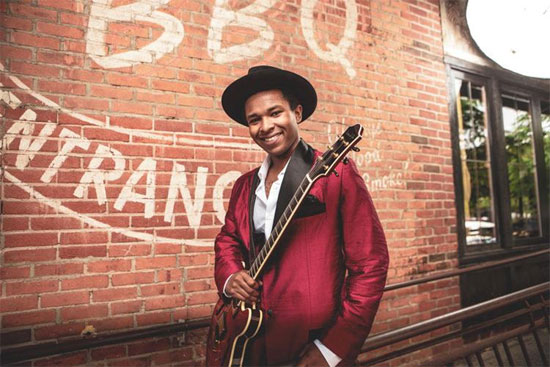 “It all started with my parents,” he enthuses. “They put me around different musical scenarios. My Mom showed me [artists] from Nas to Nina Simone to B.B. King.” He says that he grew up hearing those as well as mainstream pop acts like Coldplay. And when the subject turns to guitarists, Hicks rattles off a list that includes Grant Green and Chuck Berry as inspirations. His wide-encompassing, eclectic musical worldview is a key to his appeal and creative successes.

A prodigy, Hicks would attend the Harlem School of Arts and Talent Unlimited High School, and work as part of the New Amsterdam Musical Association. From an early age, he landed gigs at the Apollo Theater, the Cotton Club and other storied venues. His career as a recording artist began with 2010’s Embryonic.

Hicks explains that his years at Harlem School of the Arts found him focusing on classical music. “I learned how to read music and study charts,” he says. “I learned different jazz and classical studies that helped with my playing style later on.”

Gregarious and engaging in person, Hicks has always been very serious about his music. He recalls his high school days: “I had a lot of good friends. I had a high school sweetheart. But I knew I was going to be a musician,” he says. “When all my friends were going to parties, they were like, ‘Hey, Solomon! Do you want to come and hang out?’ I was like, ‘Nah, man.’” He says that he’d see all his friends dressed in shorts and t-shirts. “And I’m in my tuxedo and bow tie! I’m like, ‘I’ve got to go [to my gig], man! It’s getting late.’”

Hicks’ music appeals both to blues purists as well as fans of more popular, more commercial styles. “We put together my new album, Harlem, and then next thing you know, I ended up getting the Blues Music Award [for Best Emerging Artist Album, 2021],” he says. Yet at the same time, he notes that he played on the Kiss Cruise alongside Gene Simmons and Paul Stanley.

His own approach to the blues seamlessly combines those radically different sides of his musical personality. Hicks recalls making a decision early on: “I want to do blues; I’m going to have that part of me. But there are different sounds – like TR-808s [Roland’s early ‘80s drum machine] – that I like to incorporate.”

But he’s still rooted in tradition; Hicks’ list of guitar inspirations leans in an old-school direction. “When I hear people like Freddie King and B.B. King and Peter Green,” he says, “it’s all about feeling, about people getting up and dancing.”

Solomon Hicks has been a professional player for nearly half of his 27 years, and he knows who he is. “There are great guitar players who go for the shredding and the great speed, which is cool,” he offers. But that’s not his way.

Hicks’ schedule of late has been packed with solo dates as well as opening spots for artists as diverse as Ringo Starr, Jeff Beck, Ally Venable and Samantha Fish. He’s currently working on a project with drummer Steve Holley, best known as the drummer in Paul McCartney and Wings.

Solomon Hicks is clearly thrilled to be playing in support of the well-received Harlem LP. “After so many years on the road, now I’m really living those songs,” he says. And the endlessly inquisitive nature of his musical sensibility means that he’s up for more than just playing in front of audiences. “This will be my first time in Colorado Springs,” he says. “If there are any jams afterwards, I’m looking forward to that. In every state I go to, there’s always something special.”