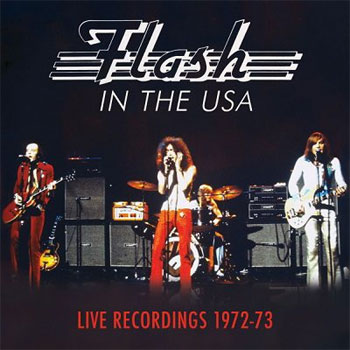 Apparently with the cooperation/blessing of the Peter Banks estate, labels have been releasing archival material associated with the late former Yes guitarist. In addition to a number of collections focusing on his solo work, there was In Public, a set by his group Flash documenting a 1973 live gig in Kansas City. That one surfaced way back in 2013. Now, nearly a decade later comes a more expansive set with no overlap. As its title makes plain, In the USA: Live Recordings 1972-73 draws from seven onstage performances of the heavy/prog rock outfit.

That’s a lot of Flash, one might say. And it’s fair to wonder if the musical marketplace truly needs five more versions of “Children of the Universe,” four readings of “Black and White,” three run-throughs of “Small Beginnings” and two more takes of “There’s No More.”

There’s no question, however, that a good deal of care and effort went into compiling this collection. The packaging is first-rate, the panoply of historical imagery in the sleeve and 32-page booklet is impressive, and the liner notes and tour documentation by Roger Houdaille is superb. There are many under-recognized bands and artists who deserve such careful attention, and it’s a joy to see one like Flash getting the treatment.

But ultimately, all of those qualities are designed to support the recordings. So what of them, redundancy aside? Well, the Roslyn, New York tracks that occupy the entirety of Disc One are pretty harsh-sounding. Bootleg aficionados like this writer tend to be predisposed toward making allowances for sonic deficiencies such as these, but casual listeners may have a harder time getting through the set.

The second disc draws from shows in Hempstead, NY and Passaic, New Jersey, and the fidelity is (thankfully) much superior. Listeners would be unlikely to mistake the recordings for a studio set, but it’s far more enjoyable listening, with frequencies more evenly distributed across the sonic spectrum, and the much-improved fidelity placing the vocals out front where they belong. The set features four tracks, and represents the collection’s best recordings of “Small Beginnings,” “There’s No More, “Children of the Universe” and the only recording of “Dreams of Heaven” from the band’s 1972 debut.

And boy-oh-boy does Banks sound a lot like Steve Howe. (With due respect to the great Howe, it’s worth noting that Banks sounded this way before Howe joined Yes.) In any event, the quality of Disc Two so far outpaces the first disc that first-time listeners are advised to start with the second disc.

All that said, the Hempstead performance isn’t complete; the disc is rounded out with some dreadful audio capturing the Passaic set. It’s best avoided, or at least consumed along with some – take your pick – Acetaminophen, Ibuprofen or aspirin. Ouch.

The third and final disc in this set draws from four fragmentary recordings made in Indianapolis, Burbank, Miami and Cape Cod. They’re noteworthy because here you’ll find the set’s only live readings of “Dead Ahead” and “Psychosync,” both of which appeared on Flash’s third and final studio outing, 1973’s Out of Our Hands. Happily, the fidelity on those cuts is pretty good, having been recorded for the Midnight Special television program. “Psychosync” in particular is pretty thrilling stuff, scaling Close to the Edge-era Yes-like heights.

After slogging through perhaps the worst-yet (and thus arguably unnecessary) recordings of “Children of the Universe” and “Black and White,” The third disc also includes (from the Cape Cod date) “The Bishop” and “Manhattan Morning,” also featured on Out of our Hands. Their comparative rarity makes their inclusion – in whatever quality – worthwhile. Sadly, said sonic fidelity is pretty dire.

Ultimately – and the compilers surely know this – In the USA: Live Recordings 1972-73 has been put together for the Flash completist and virtually no one else. It’s certainly not the idea place to begin an exploration of Peter Banks’ post-Yes prog group, and its exhaustive, repetitive nature makes it unlikely to fall into the heavy-rotation playlist of even the most ardent Flash/Banks acolyte. But considered on its own merits, the 3CD collection is a thoughtful compilation that certainly has its moments.