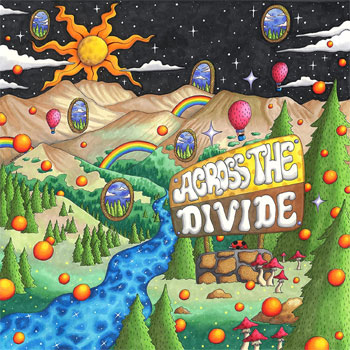 More than eight years after forming, Asheville-based quintet Fireside Collective continues to build on the momentum of early successes, including a competition win at MerleFest and a Band of the Year nomination from the Intentional Bluegrass Music Association. Founded by mandolinist and songwriter Jesse Iaquinto, the group also features Joe Cicero (guitar), Alex Genova (banjo), Tommy Maher (resonator guitar) and Carson White (upright bass). The current lineup has been together since the release of 2017’s Life Between the Lines, Fireside Collective’s second album.

The lockdowns and social distancing that characterized the last few years certainly slowed down music-making worldwide, but Fireside Collective found a way to move forward. Convening in a cabin in the Smoky Mountains, they began work on what would become Across the Divide, the fourth release – and most fully-realized effort – from the band.

Does Fireside Collective approach an album as polished document of what the band sounds like on stage, or is it more of a blueprint or roadmap for where you take things on stage?

Alex Genova (banjo): I think we look at the recorded music as a jumping-off point. On some of the songs, we’ll stick closer to the recording, while others can be a vehicle for improvisation. Lately, we’ve been seeing how far we can take our original material from where it originally started, from what the songs sound like on the albums.

Fireside Collective is very popular on the festival circuit. How does the band approach those shows differently from “hard ticket” concerts where the audience is coming specifically to see and hear your band?

Tommy Maher (resonator guitar): At a festival like DelFest we’re trying to win people over for the first time. So we’re giving them all the fire we can possibly give them in 45 minutes or so. A hard ticket show has fans who have seen us before, so we try to be conscious of what we played the last time we were there. But no matter what, every time we get on the stage, the goal is to move people. We want to give our longtime fans something fresh, and give the newcomers something that they’re going to remember and talk about.

There was a time when genre purists might have given bands like yours a hard time about combining bluegrass textures with other styles. These days it’s an established way of doing things. What sets Fireside Collective apart from other artists exploring similar musical territory?

Jesse Iaquinto (mandolin): Above all else, what we’re going for is authenticity. We grew up listening to classic rock, blues, folk and jazz, and then different things as we got into college. So, to us, the bluegrass instruments are just the timbre; they’re what make it sound warm and pleasant to the ear, but that doesn’t stop us from covering a funk song. We make it unique with the instrumentation that we have. Sometimes a song gets played once and never again; it depends on how it hits on stage. We want everybody to shine as much as possible, so specific songs just work better, and some just fall flat, and that’s okay. We’re into trial and error!

You may also enjoy my 2020 interview with Fireside Collective’s Jesse Iaquinto.