EB Davis: Ambassador of the Blues (Part 2 of 3)

Those Memphis days provided all manner of inspiration for Davis as a young man. And sometimes he learned by watching and decided what he didn’t want to do. “One of my most vivid memories is seeing B.B. King,” he says. “He used to like to wear short pants.” Davis recalls seeing King dressed that way and making a decision. “I thought, ‘Hmm. I don’t think I’m going to wear short pants. And he should either get some longer pants or some shorter legs!’” Davis makes the point that he always respected King. “He was always, always the gentleman,” he says. “Everybody liked him.”

Because he didn’t initially have a group of his own, Davis started sitting in with a number of Memphis bands. “I knew most of the musicians,” he says. One time in 1965 when Eugene Goldston came through town, he dropped by Club Handy on Beale Street. It happened to be on a night when Davis was sitting in. Davis recalls being approached by Goldston, then the owner of popular Brooklyn night spot the 521 Club. 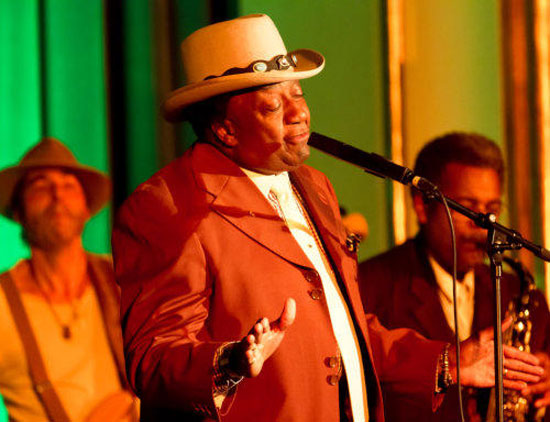 “He said, ‘I kind of like the way you carry yourself, and the way you sing,’” Davis recalls. Goldston invited Davis to take a residency at the 521 Club. “I wouldn’t refuse that,” he replied. That conversation led to Davis relocating to New York City. “I was a resident at his club for some years,” Davis says.

What Davis found in New York of the mid ‘60s was a blues scene that was highly concentrated. “New York had a big music scene,” he says. “But it wasn’t heavy on blues. There weren’t many clubs featuring it. So most of the blues lovers became regulars at our club.” Davis’ residency plus a part-time job managing Goldston’s clubs meant that he was able to make a living.

With his band the Soul Groovers, Davis came into contact with some of the big names in music. He opened for many, and got to know them. “One favorite who we used to like to open for was Wilson Pickett,” he recalls. “Quite a character. He was a feisty little guy.” Davis says that whenever Pickett encountered something that he thought “wasn’t correct,” he would let the relevant parties know about it in no uncertain terms. “And if he wanted to take it further than that,” Davis adds, “he would do that, too. He was not afraid of what you’d call fisticuffs.”

Isaac Hayes had a different character. Davis describes Hayes as “a business-type guy. He wasn’t into partying, hanging out and all of that.” Hayes was right on the verge of achieving major fame when he and Davis met. “And once he hit it pretty big, he took three of my musicians,” Davis says. “Which I will never forgive him for. He took my bass player, my drummer and my guitar player.” But Davis didn’t hold a grudge against his former band mates. “I was all right with it,” he says. “I told’ em, ‘Look: he can take you places that you’re never going to go with me, so go with my blessings.’”

Though he’s naturally musical, Davis has always focused on singing rather than becoming an instrumentalist. Asked why he didn’t pick up the harmonica until he was in his mid 30s, he laughs and provides a ready answer. “I was a full-time front man, and the front man was getting all the attention. So I just let the others play the music.”

EB Davis eventually rejoined the army to fulfill his commitment. And within a short time he found himself stationed in West Berlin, then still a democratic oasis surrounded on all sides by communist (and Soviet satellite) East Germany. When he first arrived, he found a city that seemed to him very much like New York City. “Checking out the music scene, I got the impression that there was no difference,” he says. “There was a club on almost every corner.” He says that in those days – “before the disco boom took over,” he notes – “West Berlin had a good 65 to 80 venues where they featured live music every week, if you can imagine that.”

But these weren’t blues clubs; in fact, Davis recalls, more than ninety percent of the Berlin clubs featured no blues at all. “From time to time, one club would bring in Willie Dixon and his people,” Davis says, “but they didn’t have much experience with blues.”

Davis joined a popular group, The Bayou Band, and found that he soon had as many gigs as he could handle. “There were so many places that featured live music, we were gainfully employed without even leaving the city,” he recalls. “You would just make the circuit of the clubs.”

Because younger people made up a large segment of the audience, the all-German band – nominally a New Orleans-style group – played a variety of styles. “You couldn’t hold ‘em the whole evening with just blues,” Davis says. We’d do some of the popular stuff they might be familiar with, and then we’d introduce them to the blues.” He says that approach won them some blues converts. “And once you get their attention and build up enough of a following,” he notes, “you can introduce them to your own material.” That was Davis’ approach.

One of Berlin’s most successful clubs of the time was The A-Trane, a jazz outlet. “The guy who was supposed to be my manager at the time convinced them that they should try blues and see how it went over,” Davis says. The A-Trane’s owners were initially against the idea but agreed to give it a try. “Once they tried it and saw that people were open to it,” Davis says, “then another club would say, ‘Well, they had a pretty good turnout over the weekend; so let us try blues, too.’” And EB Davis says that he was among the first Black artists onstage in Berlin; he was a kind of ambassador of the blues.

After a few years with The Bayou Band, Davis left to join The Radio Kings. That group’s lineup featured a mix of Germans and Americans; Davis stayed with them for more than seven years. In the late 1990s he put together a band of his own, The Superband, initially an all-American lineup.

These days, Davis’ Superband includes another mixed lineup: a German bassist (Tom Blacksmith) plus Davis’ wife, Nina T. Davis, on piano, organ and vocals. He first met Tina when she was playing in another band with Blacksmith. “I found it quite unusual: a young German woman playing blues,” Davis says. “I went to a few of their concerts, and then they both became a part of my band.”