EB Davis: Ambassador of the Blues (Part 1 of 3) 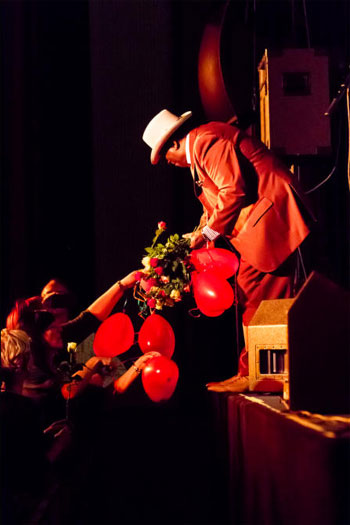 EB Davis is not the typical blues singer. Yes, he was born in the Mississippi River Delta, and yes, he paid his dues singing in clubs from Memphis to New York City. But he eventually made his mark far from home, in Germany. His story – one that features some clandestine work for the U.S. government alongside his role as singer and band leader – is a tale worthy of a movie. And in fact there is one: How Berlin Got the Blues: The Secret Life of EB Davis.

But today the warm and affable singer is out of the military, and his life is anything but a secret.
Davis was born in 1944 in the tiny town of Elaine, Arkansas some two miles west of the banks of the Mississippi River. “It’s so small, you could call it a village,” he says. Even today the town – with less than 700 residents – is more than 50 miles from the nearest Interstate highway. EB Davis’ family moved 90 miles northeast to Memphis when he was nine; his youth would be marked by frequent trips back and forth. “I grew up in Memphis, but I liked the farm life, too,” he says.

Music became a significant part of Davis’ world even before he arrived in Memphis. “When I was seven or eight years old, I was singing in the church,” he recalls. “They would stand me up on a stool and let me act the clown.” He emphasizes that his repertoire was confined to gospel. “We were not doing anything to do with blues,” he explains. “Blues was not allowed in the house,” and certainly not in the house of the Lord.

But a chance encounter set Davis’ life on a different path. When he was on his way home from school one day, he saw an old man sitting on a home’s front porch. “He was playing an old, beat-up, raggedy guitar,” Davis says with a smile. “And what he was playing, it didn’t sound like gospel to me. He was singing about something, but it wasn’t about the Devil, God, church and all of that. He was singing about his woman, his car… stuff like that.”

Naturally curious about this unfamiliar music, Davis approached the old man and asked what it was that he was playing. “This is called the blues,” he was told. And young EB Davis immediately felt a connection with the music. “I thought, ‘This sounds more logical to me.’”

Davis’ family forbade him to go near the old man. “But I would sneak over there anyway,” he admits. “Because I was fascinated by the music he was playing.” His interest in the blues grew, but it was a furtive pursuit. His family “had a problem with it,” he says. “They came from the generation that considers the blues to be the Devil’s music.”

Luckily for Davis, he had a radio. “There was a radio station out of Nashville, Tennessee called WLAC,” he recalls. “Late at night they would play some of everything – soul, blues, rock and roll – but the guy concentrated on blues.” Davis would attach the radio to a long extension cord, take the radio into bed and hide it under the covers. Today he says that he thinks his mother knew what he was up to. “When she was walking through the house, she would see that long extension cord running to the bed!”

Davis eventually joined the school band, and found himself singing mostly soul music. “We were just imitating what we heard on the radio,” he says. But then he took a detour from singing and joined the U.S. Army. “I was a young tractor driver, one of the youngest tractor drivers who ever existed,” he explains. “And after driving that thing – with no power steering – all day long five days a week, I said, ‘There has to be something a little easier!’”

Employment opportunities were limited, so when some of Davis’ friends told him they were joining the army, he decided that he would do the same. “But I was only 16,” he admits. “So I had to do it with a little ‘juggling of the papers,’ if you know what I mean.”

Eventually the brass discovered that Davis was too young to have enlisted. He explains what happened next. “I had been a pretty decent soldier, so my company commander said, ‘Here’s what we can do: We can send you back home with a debt instead of punishing you. And when you’re old enough, you have to come back and serve out your time.’ Which I did, of course.”

Meanwhile, singing the blues remained Davis’ primary passion. As he made his way toward adulthood, his love for it grew even deeper. By the time he was out of his teens, Davis knew that he wanted a life in music. “Around Memphis, a lot of the older guys like Bobby Bland were playing in Handy Park every Saturday. There would be a big jam session, and I would be there every week.”

He was fascinated by what he witnessed there. “Junior Parker had this big, long Cadillac; he would drive it up there and just pose by it,” Davis recalls. He says he wasn’t so interested in the cars the musicians drove; he was more taken in by “how those guys carried themselves. They were always dressed nice and acting gentlemanly; it just took me away!” He knew then and there that he wanted a life like theirs, as a singer. “Plus,” he hastens to add, “I really liked the music. It had a certain feel to to it that other music just didn’t have.”

Davis quickly developed a formidable range of vocal expression. He would become every bit as comfortable – and effective – as a blues shouter as he would playing the role of a crooner. And he honed his skills without any formal vocal training. He says that his musical education came in the form of “watching others, taking a little bit from this one and a little bit from that one.” He cites Bland as a major influence. “He could do blues, he could do soul,” Davis marvels. “He could do it all.” And he decided early on that Bobby Bland’s sort of vocal variety should characterize his own style as well.