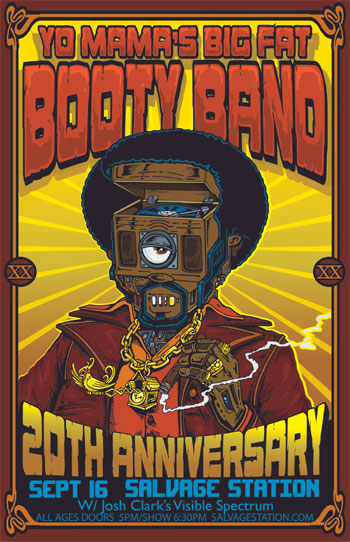 Twenty years is a long time, especially in the life of a band. But despite lineup changes, relocation and countless road mishaps, Yo Mama’s Big Fat Booty Band is as strong as ever. The Asheville-based rock/funk ensemble celebrated its anniversary with a special show, Sep. 16 at Asheville, N.C.’s Salvage Station.

The Booty Band got its start in Boone, N.C., in the basement of guitarist John-Paul Miller’s place. “The original concept was to [create] a fun party atmosphere with high-energy, danceable music,” Miller says. From its earliest days, the Booty Band’s lineup was a constantly shifting roster of top-flight musicians. “As of right now,” Miller says, “I’m the only original member left.” But across two decades of changes, the group’s vision has remained consistent.

While covers have always figured into the Booty Band’s set list, Miller says that from the very beginning the group was writing original material. And when they did play the music of other artists, the group showcased its versatility and inventiveness by recasting songs into their own style. “We’ve covered everything from Fela Kuti to Rage Against the Machine,” he says. “We’ve had full-on throwback ‘80s and ‘90s hip hop sets where we did anything from Snoop Dogg to Jay-Z. But everything we do, we put our own spin on it.”

The group relocated to Asheville in 2006. Miller says that the band’s early sound reflected the songwriting skills of founding member Josh Phillips; when he left, the band went through a brief period he describes as “floating around.” That changed in 2009 when dynamic keyboardist Mary Frances and drummer Lee Allen – both of whom sing – joined the Booty Band. With Frances and Allen on board, the group established its trademark sound. “And that’s when we really started touring heavily,” Miller says, “going back and forth across the country.”

And the Booty Band’s trademark party vibe provides opportunities for guests and collaborations, both onstage and in the studio. “Some of the members of Dirty Dozen Brass Band have come on stage with us to perform their songs, done in our [style],” Miller says. And before his passing, Parliament-Funkadelic keyboardist Bernie Worrell joined the Booty Band onstage on Aspen, Colorado for their version of his song, “A Joyful Process.”

Along the way, The Booty Band has created a formidable catalog of recorded music. In addition to several live albums, the group has released four studio efforts under its own name – 2015’s Funk Life is the most recent – and has played on nearly every recording by kid-hop sensation Secret Agent 23 Skidoo. “He gave us the opportunity to write and record on a Grammy Award-winning album,” Miller says.

At the height of its touring days, Yo Mama’s Big Fat Booty band was on the road 200 days a year, playing 150-170 shows annually. “We made a lot of good friends,” Miller says. “And we played in every state except Hawaii, plus Jamaica.”

These days, the group stays closer to Asheville, the city which all the band members call home. “After a while, the band needed a little bit of a break,” Miller says. “So we decided to step back from full-time touring.”

Miller admits that the Booty Band’s most daunting challenge is its size. “A lot of bands are just three or four people,” he notes. For most of its two decades, Yo Mama’s Big Fat Booty Band has featured seven musicians. Touring required an additional three-person crew. “Traveling with ten people on the road, it’s hard to even find places large enough for the whole band to stay the night,” he says. The Booty Band has received offers to play in Europe, but the costs involved in bringing a large band overseas made it impossible.

As far as most of the other challenges the group has faced, Miller and his band mates laugh them off; they make for good stories, he says. “We’ve been stuck on top of mountains and behind avalanches,” he says. “We’ve had our bus engine catch on fire.”

Some problems, he admits, were of the band’s own making. Some 15 years ago, the group was booked to play a set at the Jimmy V Classic, “a prestigious, black-tie event in Pinehurst, N.C.,” Miller recalls. “Not only were we late, but when we started playing, our singer decided we should perform a song that had the most swear words of any song that we played.” After three songs, the band was told to stop.

“They paid us and told us to leave,” he says with a laugh. “It was the most money per minute we ever made!” The experience marked the implementation of what the Booty Band calls the Jimmy V rule. “We’ve cleaned up a lot since then,” Miller says.

In recent times, the lineup of Yo Mama’s Big Fat Booty Band has stabilized. That, plus the fact the drummer Allen is a recording engineer – means that at long last, some new Booty Band music may be on the way. “Nobody wants to force a record out,” Miller observes. “Because that never produces good results. But everybody [in the group] has been talking about recording some new music. When bands get their own studio, that’s when they start getting experimental and really have fun with it.”

As the band approached its 20-year anniversary, they scheduled a hometown gig that represents an opportunity to look backward and forward at once. “We’re doing a total throwback set of early material,” Miller told me ahead of the show. That set was slated to feature the current group augmented by four members from the band’s original lineup: Phillips, sax player Greg Hollowell, guitarist Grady Gilbert and vocalist Suzanna Baum. “We’ve curated a list of songs that were everybody’s favorite songs back in the early 2000s,” Miller said. “Songs that we haven’t played in a long time.”

And of course the current Booty Band lineup – Miller, Frances and Allen plus Derrick Johnson (trombone), Jonathan Cole (saxophone), Ben Bjorlie on bass and trumpeter Alex Bradley – was scheduled to on hand to celebrate 20 years of deep-groove funkiness.