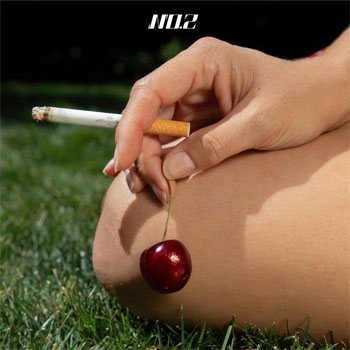 First things first: this band isn’t thenewno2, Dhani Harrison’s project named after the succession of characters who portrayed the mysterious leader in The Prisoner. No, this No. 2 has been around a bit longer than Harrison’s group, so one might think of it as the “old” No. 2. But hey, they’re new to me, and quite possibly to you as well.

This No. 2 is from Portland, and features singer/guitarist Neil Guest, formerly one of Elliott Smith’s band mates in Heatmiser. The music here is a bit more uptempo than that, but the approach of welding pop values to compact, punky songs shines through. No. 2 are kindred spirits with Bob Mould’s Sugar and even Green Day, though the songs on First Love are less bratty and more thoughtful than your run-of-the-mill Green Day tune.

A wholly no-frills production approach give the album a “live in the studio” vibe. The muscular, throaty bass of Gilly Ann Hanner and the drumming of Paul Pulvirenti propels the music forward. “The peppy “You Might Be Right” and the spare, phase-shifter extravaganza “Model of the Universe” are highlights, but the whole album is solid, solid stuff.