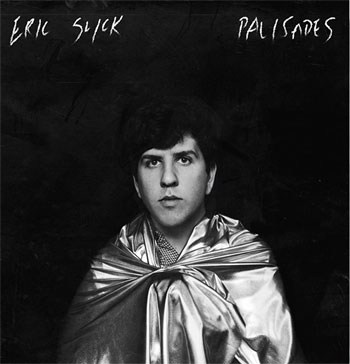 A former student (alongside his sister Julie Slick) at the Paul Green School of Rock Music, Eric Slick was catapulted to well-deserved fame when Adrian Belew chose him and Julie to work as his rhythm section in the Adrian Belew Power Trio in the mid- to late 2000s. From there, Eric joined Dr. Dog as the band’s drummer, a position he (apparently) continues to hold (I had thought they had gone inactive).

But percussion is merely one of Slick’s areas of expertise, as evidenced by a solo career. Slick has released five collections of music to date including a set of demos and an EP. His second official release is 2017’s Palisades. Now in 2022, the record is getting a vinyl reissue.

In addition to writing all eight of the songs on Palisades, Slick plays guitar, synthesizers and (of course) percussion. Still, it’s not a one-man affair; a number of guest musicians help out in various ways (additional vocals and instrumentation etc.).

There’s a clattering, DIY aesthetic at the heart of the album. “You Became the Light” has a lo-fi vibe that’s just right for the clattering, nervy arrangement of the song. Slick demonstrates a sold understanding of pop music conventions, as the song’s bridge – full of soaring Mellotrons – makes clear. The tension between the song’s ambitions and its modest sonic trappings gives it additional character.

“The Dirge” is more conventional but no less interesting. Slick creates a dense, mystical atmosphere for the song, imbuing the tune with a vaguely psychedelic-revival feel (think: late ‘90s Flaming Lips without the major label budget). “No” is a slinky tune with more pop sensibility and a boxy ‘80s-demo feel. “Slow Burn” is gauzy shoegaze with a sinister vibe.

The title track folds all of those textures – the psychedelia, the shoegaziness, the demo vibe and such – into the blender, and the result is the strongest cut on the collection so far. But then comes “You Are not your Mind,” a pop gem that sports higher production values, sharper songwriting and a more assured vocal performance. Had a major label released Palisades, I strongly suspect that “You Are Not Your Mind” would have been the (take your pick) opening track / single / spotlight number.

“For “Evergreen,” Slick recedes back into the sonic murk, but it’s a lovely sort of murk, with evocative keyboards, dissonant chording and doomy early King Crimson-style cymbal crashes. And the LP closes with “Into the Void,” a track that – “like “Palisades” – leverages all of Eric Slick’s compositional, arrangement and instrumental strengths into a winning tune.

On the occasion of its reissue, Palisades underscores the impressive talent and vision of an artist whoo continues to earn accolades today.