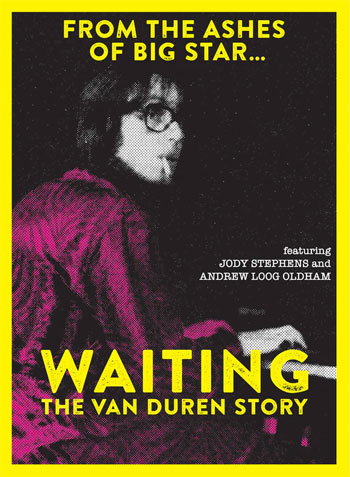 In recent years, a remarkably personal style of documentary has come into vogue. Whereas in a traditional documentary, the narrator is both invisible and omniscient, and this new (or newly popular) style, the narrator is very much part of the story, and said narrative tends toward subjectivity.

In and of itself, the approach is not a bad thing. Searching for Sugar Man and Paul Williams Still Alive are two examples of this approach in action; both are superb storytelling. Even though viewers know the subject and don’t know the narrator, they’re drawn in by a very real, very human perspective.

It’s time to add another title to that list. Waiting: The Van Duren Story isn’t merely the chronicle of one of pop music’s most criminally-overlooked artists; it is a tale of discovery and renewal for the two men who made the documentary. Greg Carey and Wade Jackson were brought together on this project as a result of traumatic events in each of their lives. Neither man had any experience making films. But they didn’t let that stop them. Driven both by their deep appreciation for Duren’s work and their innate curiosity, the two men ventured from Australia to Connecticut and ultimately to Memphis, Tennessee.

There they found Van Duren, but that’s getting ahead of ourselves. Their odyssey prior to meeting the subject of their quest is every bit as fascinating. The characters introduced to the viewers are vivid: Jon Tiven, Andrew Loog Oldham, Duren’s relatives…they all have interesting and important things to say.

I must admit that I am especially close to this story. I made a pilgrimage of my own more than a decade ago, traveling to Memphis to meet Van Duren. I found him, and while the music I heard and saw him play that night (at a barbecue joint) was wonderful, it was in meeting and speaking with him that I drew the greatest joy.

So I was in tears from the opening moments of Waiting. Van Duren’s music is strikingly resonant on an emotional level; when he sings about whatever he sings about, the listener feels what he feels. To finally see his story get told – to know that at least a few heretofore unknowing souls will discover the beauty and depth of his work – is a gift beyond compare.

If you’ve somehow wandered into this review without having familiarity with the music of Van Duren, please find some of his music right away and listen. If you like Todd Rundgren, Big Star, Emitt Rhodes or artists of their style and caliber, then you simply must know Van Duren’s music.

You can learn a great deal about him from watching Waiting: The Van Duren Story. You’ll learn about his run-ins with Scientologists, his near-misses with mainstream success, and the love that those who know him all share.

You could also read more about him – including interviews – by clicking here. But see the film, and listen to the music. You’ll be glad you did.