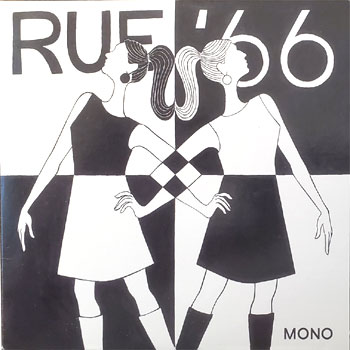 I’ve written now and then (here and here, for example) about French pop of the 1960s. The so-called yé-yé movement, and the charming if slightly odd insularity that characterized the scene. True, the French of that era didn’t pay a lot of attention to what was going on musically outside of their country, preferring home-grown artists instead. But they had a vibrant and interesting thing going on themselves.

And it was noticed abroad. Here were are more than a half century later, and people are still talking about it, listening to it, and making new music that follows on from French pop of the ‘60s. A San Francisco-based band cleverly named Rue ‘66 gets it exactly right on their latest EP, Partie de Dames (I mistakenly thought it was titled MONO).

The title track unfolds inventively, serving up key sonic characteristics that helped define the subgenre of French pop. Chirpy horns, a solid electric bass line and some wonderfully fuzzed-out surf’n’spy guitar all enter the mix in the song’s first few seconds. Some wonderful unison (or double-tracked) female lead vocals – in French, of course – are the icing on the croissant, as it were. The whole production aesthetic is note-perfect, and listeners could be forgiven for thinking the recording dates from the 1960s.

“Ne me laisse pas laimer” is ginchy pop in the Sylvie Vartan mold, with some catchy percussion and gurgling jazz-combo organ. The song blows by in well under two minutes, but that kind of brevity (and concise songwriting/arrangement) is baked into the recipe. (You want extended works? Listen to Magma.)

“Mini Jupe – Buspad” steals its riffs, but the swinging tune sounds a bit like what a dance party in The Village (aka Portmerion) might’ve sounded like during Patrick McGoohan’s little visit. The instrumental features a blazing guitar solo and another solo by the organ; the beefy horn section plays the role of lead vocalist.

This ten-minute EP concludes with a live track. “My girl Josephine” picks up the baton once held by Johnny Hallyday. It’s a straight-ahead, ‘50s flavored rocker, played with ‘60s spirit (joie de vivre, one might say) and verve, and features Serge Martial belting out the Francophone love lyrics.

Not reviewed here but well worth seeking out is an earlier release from Rue ‘66, the group’s full-length, 12 song self-titled debut from 2019. It showcases the depth and versatility of the group, and bends a few well-known songs into the Rue ‘66 style. 12-string guitars on “Je t’iame quand même” are straight out of Peter and Gordon’s “A World Without Love,” and that alone makes the album worth hearing. But even better is “Ces bottes sont faites pour marcher.” If your French is lacking, here’s a hint: Nancy Sinatra sang it in English. And better still is a note-perfect reading of a garage-psych classic, We the People’s “In the Past.” Retitled here as “Lafermeture-éclair,” it maintains all the sinister power of the original.