Beloved Western N.C.-based singer-songwriter David Wilcox is a prolific artist. Since releasing his debut album The Nightshift Watchman in 1987, he has made and released some 20 records. And Wilcox has toured far and wide, bringing his thoughtful, lyrically rich folk-based music to stages across the country and beyond. Save for some inevitable enforced downtime during parts of the past two and half years, he has remained busy.

“I had quite a good break,” he says. “It was the whole first year of the pandemic.” But Wilcox’s idea of what constitutes a break might not be a typical one. “I learned how to cook,” he says. “now I can cook anything.” And in between preparing meals, he composed some music. “I wrote lots of songs: probably 50!” 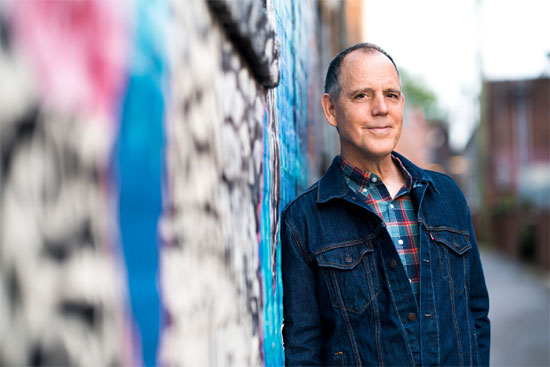 While the time away from stages paid creative dividends for Wilcox, it also served to underscore how much he missed being out on the road. “I was still enjoying that ‘introvert’ time,” he admits, “but I started to notice the long-term effects of crowd deprivation.” He hastens to add that in this context he doesn’t equate crowd with audience. He refers instead to the experience of “being part of the crowd. There’s something powerful about that, something we don’t even have language for.”

But David Wilcox is a master of language, so the songs he wrote during his extended home stay keenly reflect his ruminations on big ideas. “I was having a lot more philosophical time,” he says, “kind of pondering all the things I’m really grateful for.” Some of the new songs he has composed – none of which have found their way onto release recordings as of yet – concern themselves with topics that are sure to resonate with admirers of his music.

An old bit of wisdom that holds that while we can’t control our surroundings, we do have the power to control our responses. David Wilcox subscribes to that philosophy, and – in true fashion – he writes about that, as well. “There is a new song about emotional autonomy,” he says, “about not being blown around by the ‘emotional weather’ that surrounds me but [instead] having a sense of my own choice about how I react to things.” He says that the last couple of years have taught him a great deal about that idea. “And that’s been really cool,” he says.

Some warmly familiar themes and approaches crop up in that new batch of 50-plus songs, too. “There are a lot of songs about trying to enjoy the present moment, and then there are comical songs about spending too much time looking at a screen,” Wilcox says while grabbing a furtive glace at his own computer monitor.

With such a bounty of new material from which to choose, it seems inevitable that Wilcox would have another album in development. That seems especially likely in light of the fact that his output in recent years would seem to have slowed a bit: he released Blaze in 2014, and followed up that album four years later with 2018’s The View from the Edge. The next four years would pass without a new record.

But that’s about to change. Wilcox says that he is currently working on not one album, but several. One of his current tasks involves sorting the songs into categories. “They fit in different groups in my imagination, so there are three different piles of songs that are ‘percolating,’” he says. One of those piles features music destined for an orchestral collaboration. “I’m working with the Asheville Symphony,” Wilcox says, “and it’s really interesting.”

But for David Wilcox, 2022 also marks the return of live music and time spent in the crowd. In addition to a run of live dates, he’s busy planning an August Ireland retreat event Gareth Higgins and Brian Ammons. And this year sees the return of the celebrated Wilcox Weekend mini-music festival. All that means that those looking forward to a new record from the man might have to wait a bit longer.

Returning to a favorite theme, Wilcox laughs and says, “There are so many factors that are out of my control, so I just keep working at it and see what happens.”