Album Review: The Mutants – Curse of the Easily Amused 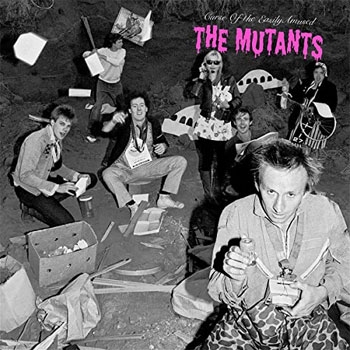 The Mutants were exemplars of what can accurately be characterized as San Francisco’s “art punk” aesthetic. Formed in 1977, the band of musical misfits and art students combined the DIY mindset of punks with the wide-encompassing creative approach of artists. Unburdened by conventional ideas as to what a band could and could not do, they placed a high value upon performance art. The group released its earliest recordings on legendary punk/new wave label 415 Records, but for a variety of reasons (mostly money) the group opted not to cut an album for that label founded by Howie Klein and Chris Knab.

And when the Mutants finally got around to releasing an album, Fun Terminal, the results were short of wholly satisfying. Don’t misunderstand: Fun Terminal is a great listen, and a vivid document of The Mutants’ particular brand of art punk. But even among members of the band it wasn’t considered a wholly successful audio document.

Fast forward a lotta years. With the full cooperation of the band (which still exists, albeit in modified form) Liberation Hall has released Curse of the Easily Amused. Six of its 14 songs appeared on Fun Terminal all those years ago, but – this is important – the versions here are “substantially different” according to project producer Peter Conheim (he’s also the band’s current bassist). A full eight of the tunes have never been released in any form, at least officially and with the band’s sanctioned approval. And everything on the new set has been remixed or sourced from unreleased tapes. Put it all together and the result is a heretofore unheard collection documenting The Mutants. As fine as those few previous releases have been, Curse of the Easily Amused in likely to serve – and serve well — as the definitive document of the Bay Area’s premier art punk collective.

Note: Those interested in this album could do worse than pick up my latest book, Disturbing the Peace: 415 Records and the Rise of New Wave. It charts the label’s story, of course, and includes an entire chapter focused upon the Mutants and drawing from firsthand interviews.