HU’s Next: The Finest in Mongolian Metal

Touring with familiar names like Five Finger Death Punch and Megadeth is a new and very different band. From landlocked Mongolia comes one of heavy metal’s unlikeliest new groups, The HU. Combining the musical folklore of their native country with the fury, volume and intensity of heavy metal, The HU are connecting tradition and modernity, while breathing new life into an established musical genre.

Casual observers should be cautioned against dismissing The HU as some kind of genre-mashup novelty; this outfit takes its cultural heritage very seriously. As Enkhsaikhan “Enkush” Batjargal explains with the help of a translator, “all of the members in the band are professional musicians who have a degree in their fields.” He emphasizes that the members of The HU “have exemplary knowledge toward traditional music as well as modern rock, opera, and every type of music there is.” 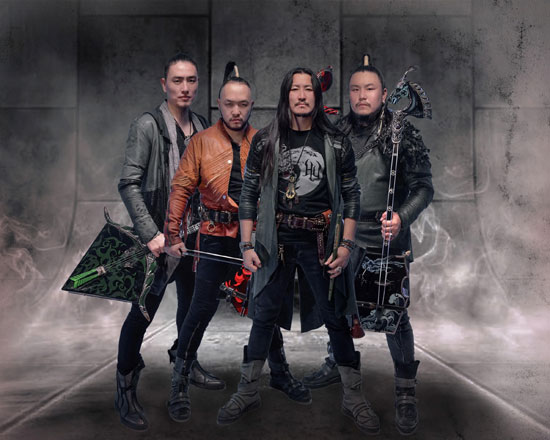 Though it’s largely unknown in the West, there’s a proud tradition of bridging the gap between traditional Mongolian folk music and contemporary styles. Enkush explains that Mongolian bands like Egschiglen and Altan Urag were pioneers in that movement. “We grew up listening to them and were inspired,” he says.

Enkush is one of the four musicians in The HU who are out front onstage; he’s joined by Temka on tovshhuur (Mongolian lute), Jaya on tsuur (flute) and Gala. Gala and Enkush both play the morin khuur, known in the West as a horsehead fiddle. The instrument looks like a lute but is played with a bow rather than being plucked or strummed.

“As a horse fiddle soloist, it is an honor to play the most popular traditional Mongolian instrument,” Enkush says, adding that his family and friends in Mongolia “think very highly of the fact that we are taking this music to the world.”

Backing up the quartet for live dates are four additional musicians; they reinforce The HU’s heavy metal textures, playing electric guitar, bass, drums and an enormous Mongolian percussion kit. The total effect is a melodic yet thunderous assault. Perhaps not coincidentally, the group’s new album (out September 2) is titled Rumble of Thunder.

The HU’s lyrics are unintelligible to most English speakers, but Enkush believes that audiences nonetheless pick up on the powerful messages in the group’s music. The HU sing about “characteristics that are missing in modern society,” he explains. “Respecting your elders, respecting nature, and having a balanced ecosystem. We put those messages in each of our tunes, and I think it has been succeeding.”

A sense of history is at the core of the group’s music. While a Western perspective often paints 13th century emperor and warrior Genghis Khan as a villain, in Mongolia he’s the country’s most revered historical figure. So it’s not surprising that The HU’s debut album, 2019’s The Gereg featured a single titled “The Great Chinggis Khaan.”

The Gereg charted in ten countries, and performed especially well in Austria, Switzerland and the UK. The group has been touring around the world, often to sell-out crowds. In recognition of their contributions to spreading Mongolian culture globally, The HU were awarded the country’s highest award – fittingly enough, the Order of Ghenghis Khan – in 2019.

The band’s name might seem a clever play on words, a nod to a certain British group – heroes to a generation and active to this day – who launched their career expressing a hope that they’d die before they got old. “It wasn’t intentional at all,” Enkush insists, noting that Hu is short for Hunuu, “one of the historical empires [conquered] by the Mongols.” Hu is also the root for many words in the Mongolian language relating to humans, family, people and children. “It has lots of meaning, so we thought it was an awesome name,” Enkush says.

All four of The HU’s primary musicians are vocalists as well; they’re practitioners of Mongolian throat singing, an ancient technique that produces otherworldly overtones. When it’s suggested that there’s a surface similarity between throat singing and the “harsh vocals” of Scandinavian black metal bands, Enkush is dismissive. While harsh vocals can be traced back to mid 1980s “Viking metal” band Bathory, throat singing “has been used in the high mountains of Mongolia ever since the start of human history,” Enkush says. It was developed by imitating natural sounds “such as wind, water, and the screams of mountain lions.”

And the combination of that kind of vocal technique meshes seamlessly with the metallic instrumental roar of The HU. “You can’t explain it, but it sounds like something very familiar and powerful,” Enkush says with a sly grin. “You understand that, in nature, it’s usually predators [who] have that kind of sound.”