Danielle Nicole: Bassist Beyond the Blues

Danielle Nicole makes music informed by the blues yet not constrained by it. She cut her teeth as a bassist, singer and performer while a member of Trampled Under Foot, a trio featuring her brothers Nick and Kris Schnebelen on guitar and drums respectively. Nicole notes that she and her siblings “came from a musical family through our parents and our grandparents.” The group released a succession of well-received albums; their sixth, 2013’s Badlands looked to be a breakthrough, thanks in part to a distribution arrangement with Concord Records. 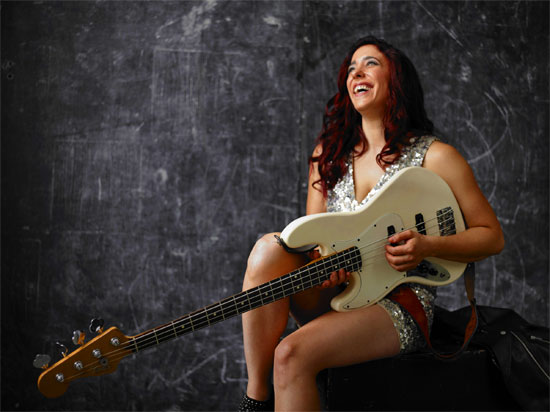 They bought the rights to it for ten years,” Nicole says. But not long after that album’s release, she and her brothers decided to break up the band. “Concord offered to keep me on as a solo artist,” she explains. By 2015 she would release a self-titled EP and a full-length album, Wolf Den. The pair of releases are representative of a transitional period in Nicole’s musical career.

While asserting that both records remain fair expressions of her musical journey thus far, Nicole acknowledges the transitional character of those releases. “I had written about half of [Wolf Den] when I was still with Trampled Under Foot,” she explains. “So it had ‘the TUF sound,’ as I called it.” But she emphasizes that the record displayed her efforts to branch out and “kind of start to find my sound.”

By 2018, Nicole seemed to have discovered that sound. Released that year, Cry No More is a varied and fully-realized album that draws from a wide array of influences. While she says that the record wasn’t created with a specific goal of moving away from traditional blues, Nicole freely admits that her second long player is “a lot more soul-driven.”

The influence of Stax and Muscle Shoals are felt throughout Cry No More’s 11 songs. “As a songwriter, you always want to learn,” Nicole says. “You always want to expand your palette.” She credits the album’s producer, Tony Braunagel, who also played drums on the record, for helping to conjure the soul vibe. “When the songs started coming together, and we got into the studio, I was like, ‘Wow, this is kind of taking on a life of its own,’” Nicole recalls.

It’s not as if Nicole had been raised on a steady diet of nuthin’-but-the-blues; her parents exposed her and her brothers to a wide range of styles. “We listened to everything,” she enthuses. “My dad had a really great record collection, so I got to listen to Aretha Franklin and Etta James, but then we also had Pink Floyd, Led Zeppelin and the Everly Brothers.”

So as she developed her own musical identity, the idea of finding a lane and staying within it never really occurred to Nicole. Growing up with an appreciation for many styles meant that “I could take a lot of those influences and put them into my music,” she says. “In the music world, people want to label you. They want to fit you in this cookie cutter: ‘Blues is round and rock is square.’” She laughs and notes elliptically that her music is filled with “all these triangles and stuff.”

Nicole explains that she found herself in the role of singing bassist almost by default. “When my brothers and I first decided to play music together, Nick and Chris already played their instruments well,” she says. “We didn’t have a bass player.” So she offered a suggestion to her siblings. “We could just keep it a trio, and I’ll just start working on bass.” A left-handed player who took naturally to the instrument, Nicole says that the biggest challenge she faces with regard to the bass is gear. “They just don’t make as many left-handed basses,” she observes. “So it’s harder to find the good quality ones.”

In her solo career to date, Danielle Nicole has had no difficulty finding quality musicians with whom to work. Cry No More features an array of guest stars, including Luther Dickinson, Sonny Landreth, Kenny Wayne Shepherd and Walter Trout. But her strong musical vision and force of personality means that even among those stars, Nicole easily holds her own, never getting overwhelmed or overshadowed.

Her early years woodshedding in Trampled Under Foot doubtless helped her learn important lessons that she can apply today. “At the end of the day,” Nicole observes, “people are putting butts in the seats to hear my songs and to see the band work… together.”