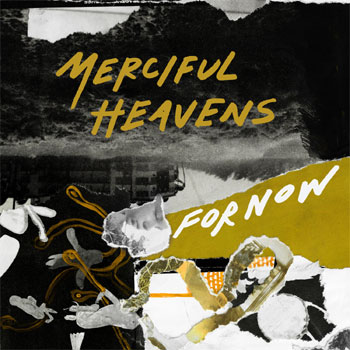 I’ve been reviewing albums for, oh, close to 20 years now. I’m on many music publicists’ mailing and e-mail lists, and I’m grateful for that. Occasionally, though, I receive unsolicited material from anonymous sources. (Or, on rare occasions, I recycle the mailing package before noting from whom it came.) That, or something like it, is what happened when For Now showed up on my front porch. It wouldn’t fit in my mailbox, because it’s a 12” record.

And unless an unsolicited record I receive is clearly some kind of music I detest, I give it a listen. (Not always the case with unsolicited CDs, I’ll admit). So listen I did to this EP from an act calling itself Merciful Heavens. As an enclosed sheet helpfully explained, Merciful Heavens is Austin-based singer and songwriter Christian Glakas (plus four other musicians on various tracks), and this (presumably) self-released disc is a collection of six original songs.

The set opens with “Apples: :” (yes, that odd punctuation is part of the song title). The track was released in 2021 as a single. It’s an understated, minor-key number with a snaky, inviting rhythm guitar figure at its core. The cut reminds me a bit of a hipper Jackson Browne, with a melancholy hint of Elliot Smith. Glakas employs familiar phrases but mashes them up in unexpected ways.

“Underground” is hypnotic and contemplative, with a breathy vocal. The arrangement’s use of keyboards and programming is inventive and appealing, and the guitar lines at the center of the tune draw the listener into Glakas’ world.

The title track has a country-rock (Bakersfield style) character reminiscent of early Eagles without the attitude. The song’s breezy harmonies are a treat. “Where the Sun Will Find You” is equal parts baroque pop and drawing room singer-songwriter balladry. “Inside Out” is the sound of having a rocking tune in one’s head but harnessing it into something much quieter. The quality of Glakas’ lyrics are such that the approach works; powerful guitars would have smothered them.

The EP ends with an instrumental, “Fluid Days.” It’s the set’s twangiest number, but it’s lovely just the same. And it’s a fully developed song, not one that sounds like an unfinished track waiting for a vocal overdub. The clean electric picking is enjoyable enough that words aren’t needed. (The wordless vocals work nicely.)