This one deserves a bit of background. In 1970 Creedence Clearwater Revival was on top of the world, and deservedly so. The quartet from El Cerrito, California had amassed an impressive run of hit singles; at least eight had charted between 1968 and ‘69. And while founding member and rhythm guitarist Tom Fogerty would leave the group in 1971, at this point in the band’s history they were still going strong as a studio force and a live act. They toured overseas, playing gigs that included one at London’s fabled Albert Hall (the venue referenced in the Beatles’ “A Day in the Life”). 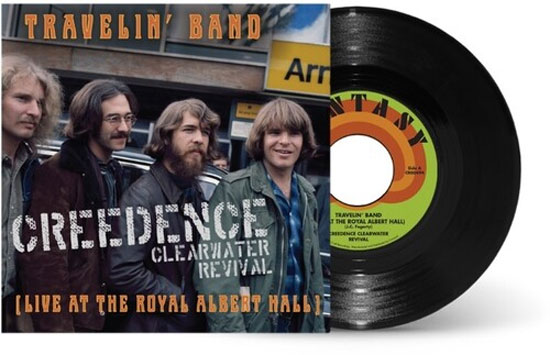 Fast forward to 1981. Nearly a decade after CCR split, there was still plenty of interest in the band. Again: deservedly so. Fittingly enough, that year Fantasy Records released a previously-unheard live recording titled The Royal Albert Concert. Trouble was, the recording was in fact a hometown gig, capturing Creedence at Oakland Coliseum in January 1970. Still, the record sold a half million copies by ‘86, and twice that by the mid 1990s.

When Fantasy realized its mistake, the record was repackaged and re-titled The Concert. But that left one small matter unsolved: what of the actual Royal Albert Hall concert? It was known that the performance was captured on tape. So where was it?

Fast forward yet again, this time to present day. The recording has been found, and as fate would have it, the show wasn’t just recorded: it was filmed, too. Bob Smeaton, director of the Beatles Anthology project back in the ‘90s, has put together a finished concert film, CCR at the Royal Albert Hall. And Giles Martin – yes, son of George Martin, and the man behind many of the recent Beatles archival/restoration projects – worked his magic on the audio.

The album is due out mid-September, but seeing as CCR earned its label of the Great American Singles Band, an advance 45 rpm 7” single was released in June. (I’m just getting to it now.) The single’s a-side is “Travelin’ Band,” a live reading of the group’s 12th single; at the time of the Royal Albert show, the song was reaching #8 on the British chart (at home it rose to the #2 spot).

CCR was never a jam band, though they certainly had the chops to be one. So while the studio version of “Travelin’ Band” runs 2:08, the live performance captured on the single is 2:09. If you loved how Creedence sounded on the records, you’d love’ em onstage the same way.

Perhaps not to give too much away on the advance single, Fantasy has (some might say perversely so) placed a live recording from The Royal Albert Concert – which, as I’ve explained, is no such thing – on the B-side. Still, “Who’ll Stop the Rain” is a great song in any form, and it was the a-side of the “Travelin’ Band” single back in 1970. The live version runs nearly ten seconds longer than its studio counterpart. Strangely enough, the song did not find its way into the actual April 14, 1970 Royal Albert Hall set list.

The 45 comes housed in a colorful and sturdy picture sleeve, and the record reproduces the vintage Fantasy label. It’s a lovely souvenir, and a nice tease/placeholder until next month when we finally get to hear the actual concert.

Read much, much more about CCR here.