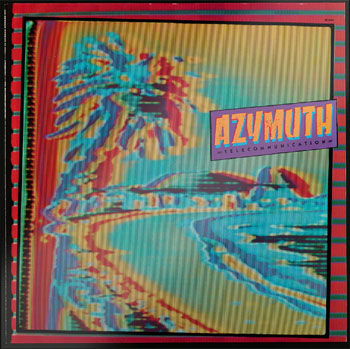 It may be difficult to imagine such a thing today, some five decades after the fact, but in the early 1970s, jazz/funk/fusion was more than a blip on the commercial landscape of the music industry. Though jazz would – sadly, and in short order – soon morph into the dreaded “smooth jazz” of artists like Kenny G and what one hears in the background during Weather Channel promo breaks, as the 1970s got underway, something interesting was taking place.

Inspired by a wide array of influences – among them Miles Davis’ groundbreaking Bitches Brew and Jack Johnson, as well as tropicalia and the rise of electronic instruments – accomplished musicians form the jazz side of the musical world begin to branch out. The hard bop, third stream and other jazz subgenres gave way to something that seemed to aim for the sweet spot between the accessibility of rock/pop and the adventurousness inherent in jazz.

And this movement was by no means limited to the U.S., the home of jazz. As far away as Brazil, creative musicians were exploring this new fusion of musical styles. In the early ‘70s a trio of musicians from Rio De Janeiro – José Roberto Bertrami (keyboards), drummer Ivan Conti, bassist Alex Malheiros – put together a cover band, Grupo Seleção. By 1972 they got together with acclaimed singer/songwriter Marcos Valle as Som Ambiente. They released a self-titled LP and a film soundtrack. By 1975 the trio (now without Valle) were working as Azymuth.

The group released a succession of albums, and by 1979 they had moved to Milestone Records; they’d remain with that label for the better part of a decade, recording at least ten albums. 1981’s Telecommunication is a representative selection from among those records, and a new reissue (on vinyl, from Jazz Dispensary) offers the ideal opportunity to revisit this release from nearly four decades ago.

Telecommunication is at once sophisticated and accessible. The grooves are deep, but with its shades of Brazilian samba, it’s laid back in a way that hints at the smooth jazz that lay just ahead. Yet unlike the music characterized by that oft- (and fairly) maligned style, Azymuth’s relaxed yet somehow energetic mix of styles is never insipid or cloying. It’ can be actively experienced or serve as a pleasing background, but it steers clear of becoming the sonic equivalent of wallpaper.

The vocoder work in “May I Have This Dance?” (“Conçede-Me Esta Dança?”) places it firmly in a specific era, but as a funk poppin’ disco-jazz-samba fusion, it’s quite successful. Even better is the album’s centerpiece, “Last Summeri n Rio.” At over ten minutes, the tune features the core group plus two extra musicians providing electric guitar and percussion. At its core, the piece is a two-chord vamp, but it’s a wonderfully inviting one, with fluid melodic lines gracing a slinky, sexy foundation.

The album ends in perhaps unexpected fashion. The last of Telecommunication‘s seven tracks ins in fact two separate pieces. “The House I Lived In” (“A Casa Em Que Vivi”) is built around Bertrami’s keyboards, and blasts off full of energy before settling into a chill-out vibe. And the record concludes with a brief piece titled “Prelude,” a fetching if simple solo organ instrumental from Bertrami.

After their Milestone era, the group relocated to the U.S. where they pursued more music in the style they dubbed “MPB jazz” (Música Popular Brasileira). Bertrami passed away in 2012, but the group continues today with Conti and Malheiros plus other musicians. A testament to their importance and long-lasting influence, they recently worked with Adrian Younge and Ali Shaheed Muhammad on n album, Azymuth JID004.

Jazz Dispensary’s 180-gram reissue of Telecommunication is part of the label’s ongoing Top Shelf series of reissues. Other than the heavyweight vinyl, this new reissue is a straight copy of the 1982 original.