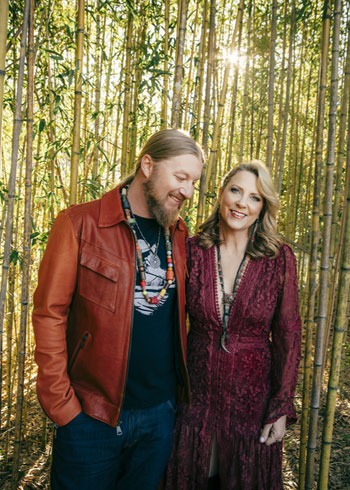 The creative wellspring from the Tedeschi Trucks Band’s 12-member ensemble yielded a lot of worthy material. “That was the direction we just kind of went with,” Tedeschi says. “Whatever was a great song and really sounded strong and could carry its own was going to be part of the project.”

But all that music added up to much more than an album. That reality led to re-envisioning I Am the Moon as a project on an even grander scale. “Once we realized how much music we really had, we [asked ourselves], ‘What are some of our favorite albums?’” Tedeschi recalls. Husband Derek named John Coltrane’s ‘ landmark 1964 jazz LP, A Love Supreme. “It’s like 35 minutes,” Tedeschi notes. Another album mentioned was Jimi Hendrix Experience’s Axis: Bold as Love. “That’s like 34 minutes,” Tedeschi says.

Those albums – concise at least in part because of the limitations of the vinyl LP format – made indelible impressions on the musicians of TTB. There was something just right about their relative brevity. “So,” Tedeschi explains, “we realized that if we split up [I Am the Moon] in a way where people could digest the music and enjoy it and not be overwhelmed or inundated with too much music at once, we could actually tell this story better, let it kind of sink in a little at a time.”

Each of the four albums – set for vinyl release in September as well – has its own distinctive character, and provides a rewarding listening experience. It’s not strictly necessary to listen to all four records to appreciate the messages and the music, but it helps.

Susan Tedeschi says that there were multiple foundational goals within the project: “tell the story, keep it moving, keep [the listener’s] interest in each one, and show how they’re all tied together.” But there were other concerns as well. “We wanted to spread out the different singers and styles,” she says. “It was a combination.”

Past TTB albums have come together comparatively quickly. The group’s standard approach has been to schedule studio time whenever the band is off the road. This time, things were a bit different. “We were working on things at our own homes alone, and then brought things together in August of 2020,” Tedeschi says. “That was the first time we sat down and really started to write.” The group initially worked as a trio – Tedeschi, Trucks and Mattison – and eventually brought in more members. “In August of 2021, we started touring as the 12 piece again.” In the end, the making of I Am the Moon took nearly two years.

I Am the Moon has a thematic unity through its lyrics, but the high-flying instrumental interplay that has always been a TTB hallmark is showcased as well. Although the lyrics of I Am the Moon are a key to its strength, some of the project’s strongest moments are found on a 12-plus minute instrumental, “Pasaquan.” That track spotlights the TTB’s jazz sensibilities, and reveals a character similar to the Butterfield Blues Band’s groundbreaking 1966 epic, “East-West.”

“This is really the first project that we’ve done as Tedeschi Trucks Band that really shows Derek as the instrumentalist as he is,” Tedeschi says. She believes I Am the Moon spotlights Trucks’ “ability to stretch and improvise, incorporating world music and his Allman Brothers roots.” She sees the new suite of four albums as an exemplar of “all these beautiful qualities that this band has.”

As the group returns to concert stages, their live approach to the new material reflects the way it’s being rolled out for release. “We won’t play anything that hasn’t been out either on record or on YouTube with the film [with which] it coincides,” Tedeschi says. “Then as the summer goes along, as each record gets released, we’ll start incorporating more songs.” She chuckles a bit as she reflects on the TTB’s massive body of work. “So, instead of 100 songs, we’ll have 124 songs to pick from.”

Tedeschi concedes that the manner in which many listeners experience music in 2022 doesn’t always lend itself to the album (or multi-album) format. “People can listen to anything in any order once they get it,” she says. And TTB took that into consideration when creating I Am the Moon. “It’s important that [the songs] stand on their own, which means they have to be great sings,” she says. “And ultimately, “I feel like all these songs that we chose can do that.”