Susan Tedeschi: To ‘The Moon’ … and Beyond

This is the first of two features focusing on Susan Tedeschi and the Tedeschi Trucks Band, the group she leads with husband Derek Trucks. 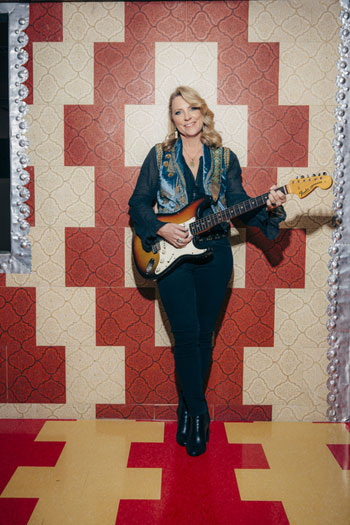 Taking a page from the classic early ‘70s Mad Dogs and Englishmen musical revue – and adding its own original songwriting, character and musicianship – has been a winning approach for the Tedeschi Trucks Band. Led by wife-and-husband duo, guitarists Susan Tedeschi and Derek Trucks, the group has won widespread critical and commercial success.

After combining popular groups led by Tedeschi and Trucks in 2010, TTB released its debut album, Revelator, the following year. Three more studio albums, three live releases and nearly a dozen live archival albums would follow, along with Grammy nominations and wins, Blues Music Awards and other recognition. After a pandemic-imposed break from live performance, the group returned last year with a tour in which it re-created onstage the classic 1970 Derek & the Dominos album Layla and Other Assorted Love Songs; a live document, Layla Revisited (Live at Lock’n) soon followed.

But even with all that activity, TTB’s prolific nature was only beginning to reveal itself. With a staggering amount of talent contained within the 12-person group, its creative potential seemed unlimited. And that idea is supported by the appearance of I Am the Moon: I. Crescent. Released June 3, it’s the first of four new albums from Tedeschi Trucks Band, and part of an ambitious suite of songs that hold together conceptually while standing successfully on their own as well.

As the timed roll-out of Tedeschi Trucks Band’s new music begins, the band is embarking on its 2022 Wheels of Soul Tour, taking to the stage with Los Lobos and Gabe Dixon. And now is an ideal time to take a look back at the creative musical journey – so far – of the band’s co-leader, Susan Tedeschi.
Born in Boston and raised in nearby Norwell, Massachusetts, Tedeschi grew up listening to her father’s record collection, and absorbing some of his musical tastes. Tedeschi’s father frequented the region’s folk clubs, and those clubs took a wide and eclectic approach to booking artists. “You could see Reverend Gary Davis, Taj Mahal and Dave Van Ronk all in the same night,” she says.

He also followed the music and career of artists as varied as The Staple Singers and Joan Baez, and he enjoyed the Beatles ‘White Album.’ “And he went to see Bob Dylan at the Newport Folk Festival the year he ‘went electric,’” Tedeschi says. Her father sat under a weeping willow tree with Mississippi John Hurt for an hour and a half. The blues legend “had his guitar out, playing songs and talking to my dad,” she says.

All of that made an on young Susan Tedeschi. “As far back as I can remember,” she says, “I was listening to [music] that my parents had.” Thus inspired, she knew she wanted to pursue music, and began singing when very young. “I was doing plays and musical theater starting at age six, and I auditioned for Broadway when I was 10,” she says. “I met Johnny Cash; I had a lot of experiences around that age that helped shape what I do to this day.”

Tedeschi developed a finely-tuned pop sensibility. She and her childhood friends bonded over a shared appreciation for the Bee Gees, Madonna, Run-D.M.C and Beastie Boys. “I remember going to a yard sale and buying [The Allman Brothers’ 1973 album] Brothers and Sisters and The Clash,” she recalls. And she was a fan of assorted Boston-based acts like the J. Geils Band, Aerosmith and the Cars.

By age 12, Tedeschi was lead singer in a local band. “We didn’t really have a name,” she says with a laugh. “We did everything from Beatles covers to Rush to Bon Jovi to Boston.” She says that group was her first real attempt at going professional. “We would play private parties and yacht clubs for $50 here and there,” she says. “It was a good experience at getting out in front of people and seeing what worked and didn’t work.” That group would be the first in a succession of bands for Tedeschi. 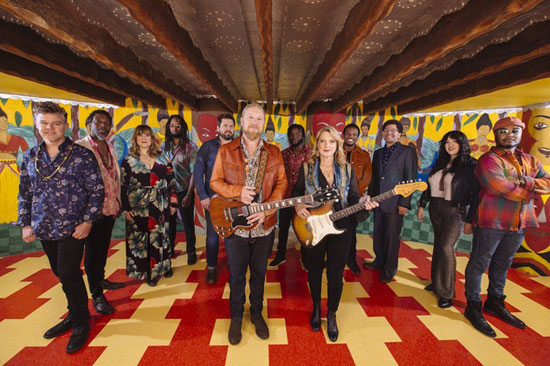 It wasn’t until college that she gained a fuller appreciation for the blues. “And it wasn’t until I graduated from college that I figured out that there were all these other artists that I didn’t know about,” she admits. “I didn’t know about Koko Taylor and Big Mama Thornton.” But she learned, making up for lost time. And Tedeschi continued to expand her musical horizons. “I learned about gospel artists like Mahalia Jackson,” she says.

Tedeschi’s gospel journey started when she was a student at Berklee. “I began part of the gospel choir as a sophomore,” she says. Being a white girl from Massachusetts, it was really cool getting to go sing in [African American] churches.” Her experiences included singing with the James Cleveland mass choir “It was quite an amazing education,” Tedeschi says. “I was blown away by how the music could make you feel so spiritually moved. I was like, ‘Shoot! If this was the choir at my church, I would’ve gone to church every day!’”

Observers of Tedeschi’s own music – as a solo artist, leading her own group and then eventually co-leading Tedeschi Trucks Band – might consider her choir experiences among the most important foundations of her soulful style. “I learned how beautiful and communal singing can be,” she says.

Primarily a vocalist up to that point, Tedeschi’s main instrument was piano. “I wrote on guitar,” she says, “but it was mostly ‘cowboy chords.’” After college, she began to take guitar seriously; today she’s a skilled and expressive player. “I’m a huge fan of Joni Mitchell, Bonnie Raitt, B.B. King,” she says, noting that those artists all share a commitment to storytelling and melody, values she sought in her own work. “So I really started to try to hone my songwriting,” she says.

After college, Tedeschi became immersed in the Boston live music scene, networking and becoming friends with a wide array of the region’s musicians. She eventually put her own band together; between 1995 and 2008 Tedeschi released six well-received albums. She also guested on recordings by other artists including Robben Ford and Little Milton. The Susan Tedeschi Band became an in-demand opening act, sharing stages with Bob Dylan, John Mellencamp, The Rolling Stones and others. As a solo artist, Tedeschi is a five-time Grammy award nominee.

After marrying guitarist Derek Trucks in 2001, Tedeschi guested on two Derek Trucks Band albums. Her momentum as an artist in her own right continued to grow. But at the end of that decade, she and Trucks decided to put each of their groups on hiatus, instead creating a large ensemble group called Tedeschi Trucks Band.

“Derek was like, ‘Do you want to do this band with me?’” Tedeschi recalls. She had momentary misgivings. “How am I going to co-lead now and still feel like I’m getting to be heard?” she wondered. “But I thought, ‘I’ve got to take this opportunity. This is not going to be here forever, so I’d better do it.’ I didn’t want to miss out playing with Derek, because he’s really one of the greatest guitar players I’ve ever heard.”

And while Tedeschi allows that getting the balance right was tricky, she and Trucks are clearly making it work. “We have different takes on things sometimes, but we’ve learned to communicate,” Tedeschi says. “And we’ve learned to sacrifice a little bit for each other and to go along with each other’s kind of hope and dreams.” And those dreams have found fruition with I Am the Moon.