In May 2012 Pauly Juhl was approach by a friend who wanted a New Orleans-style second line jazz band to play at a wedding rehearsal. A veteran of Dixieland jazz since his high school days, Juhl says that he “jumped to the opportunity.”

Drawing from Asheville’s deep pool of talent, he recruited some of the best players he could find. “I was able to get Jerome Widenhouse [trumpet], Henry Westmoreland [sousaphone], Jason Bullock (baritone sax] and J Good [drums] for the first gig!” he says. After only a few practices and a couple of gigs, Juhl knew he had put together something important. “My mind exploded with possibilities of what a second line brass band could bring to our community,” he says. 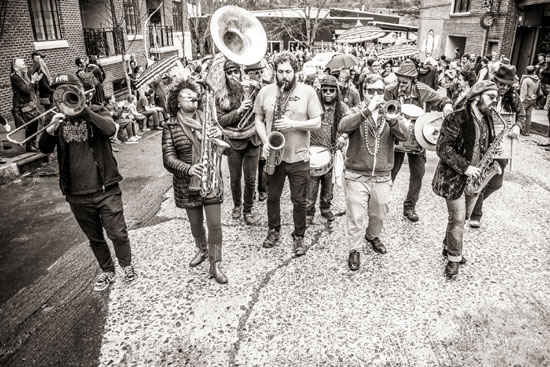 The next step was a bit of guerrilla theater. “We did a second line at the very last Bele Chere Festival, unannounced,” Juhl says. “We had hundreds following us through the festival streets till we were met with a line of police officers. They politely suggested, ‘This is your last song… right?’” He notes that the new group pursued every opportunity to play for people including “festivals and any other reason to march around and make some noise.”

Juhl emphasizes that at the time, second line parades were new to Asheville. But Empire Strikes Brass was “welcomed by most to see horns and dancers stream down the sidewalks. Anyone who could play a horn or percussion could join us,” he says.

The group expanded to include other respected players from the local music community. Because many of the musicians were in demand, ESB had a revolving door membership, but the lineup eventually stabilized. Today the band includes Juhl plus Alex Bradley, Sean Donnelly, JP Furnas, Nik Hope, Debrissa McKinney, Lenny Pettinelli, Chris Porter and Kyle Snuffer.

Holding together a group with nine members brings challenges. “Getting nine people and all the gear around isn’t easy,” Juhl says with a chuckle.

The 2014 addition of Lenny Pettinelli on keys and vocals allowed ESB to make the jump into original material. The group released its first album of original music, Theme for a Celebration, in 2017. Returning to Echo Mountain Studios in 2019, the group recorded their second album, Brassterpiece Theatre. That same year, ESB played to its largest crowds yet: several nights at Red Rocks Amphitheater in front of 10,000 people at each show.

For Empire Strikes Brass’ recent anniversary show at Salvage Station, many past members and collaborators joined the group onstage. “It was an emotional night,” Juhl says, “thinking back about the last 10 years and playing some of our favorite songs.”

Juhl notes that ESB will continue to celebrate throughout its anniversary tour this summer and into the fall, but the band’s Asheville home is always special. “Asheville has the best community in the world,” he says. “We travel all over, but we always come home knowing we live in the right place.”