Ten Years of Andrew Scotchie and the River Rats

Just over a decade ago, Andrew Scotchie was one of many buskers on the streets of downtown Asheville. Accompanying himself on acoustic guitar and joined by a high school classmate on harmonica, the experience was a departure. “I had just come out of a punk rock trio,” Scotchie recalls. “I wanted to try something on the other end of the spectrum.”

Things took off quickly. By 2012 Scotchie was leading a four-piece band, sometimes augmented by a horn section. He hosted Barnaroo, a festival on his family’s property. With a DIY approach to making music as well as promoting it, the still-teenage Scotchie built on local buzz for his band, the River Rats. 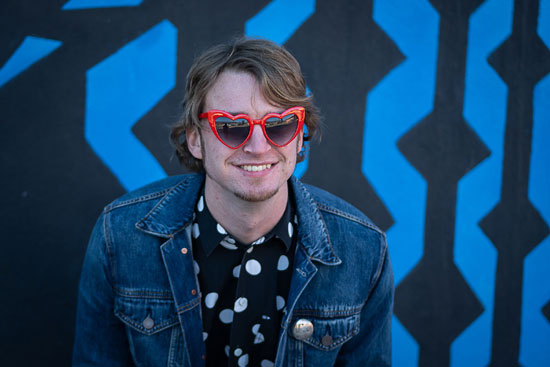 Scotchie notes that he has learned from both successes and mistakes along the way. “We’re talking about a career path that isn’t taught in school, requires ample leaps of faith, and, to some, is still considered a fantasy,” he says. And while he considers his band mates family, he candidly admits that “finding that balance between sonic soulmates and business partners is quite a journey.”

Andrew Scotchie applies the same care and effort to marketing his band as he does to the process of writing and arranging his original, blues-tinged rock music. “While I strongly believe in branding and consistency, I also have a severe fear of doing the same thing or sounding the same,” he says.

The band’s 2015 debut, We All Stay Hungry is defined in part by its youthful enthusiasm. Family Dynamo from 2018 marked a leap forward, especially in Scotchie’s lyrics. The pandemic didn’t slow the group’s momentum: 2020’s socially conscious Everyone Everywhere built on the previous record’s foundation, and a 2021 EP (Live… from a Distance) showcased the band – Scotchie plus longtime bassist Keith Harry and drummer Logan Jayne – in their element, live and onstage.

All the while, Andrew Scotchie and the River Rats have maintained a busy tour schedule. And life on the road has included all manner of Spinal Tap-like mishaps. Scotchie ticks off a hilarious (if only in retrospect) list that includes a bat getting trapped in the band’s hotel room and goats eating their set list.

During a high-profile 2018 show in Abingdon, Virginia, an exuberant Scotchie – equipped with a wireless guitar setup – made his way onto a catwalk above the audience. He later discovered that he had split his pants open on the way up. “I suppose that’s one way to get an audience to remember you,” he says with a laugh.

But Andrew Scotchie and the River Rats have never had much difficulty making an impression upon audiences. And Scotchie is grateful for the support he and his band get in Asheville; the band has been named Best Rock Band several years in a row in Mountain Xpress’ annual readers’ poll. “When the band first started playing out, there were some people that treated us like pesky kids,” he says. “But there were many more that acknowledged the music, gave it a chance and were willing to help guide the band. Because they saw how dedicated we were.”