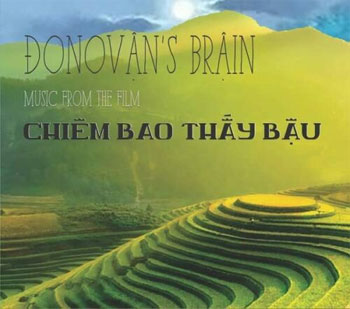 I’ve reported on and/or reviewed the music of Donovan’s Brain on multiple occasions over the last decade or so. While I seem to have missed some of their releases, I’m on record as recommending at least three of the ones I did know about. And the latest is no exception, even though it’s remarkably different from past efforts by this group.

As the accompanying press one-sheet explains, the band paused during the making of its next release, pivoting instead to craft the soundtrack to a Vietnamese film by a director who works under the name Mr. Tam. Perhaps oddly, the music for this film – released as Chiêm Bao Thấy Bậu – doesn’t have a Southeast Asian character. Instead it’s inspired by classic krautrock like Cluster, Harmonia, Kraftwerk and Neu!

The set opens with a string synth figure, vaguely reminiscent of the Mellotron opening of “Strawberry Fields Forver” but with a character closer to Tangerine Dream. The moody and evocative “I Am Not” follows, serving up a more conventionally musical character, an aural soundscape that falls between spaghetti western and shoegaze. Genty sung English-language vocals steer the music in a more familiar direction, but there’s something enduring exotic about the tune.

“Connexion Complète” explores sonic territory closer to Kraftwerk. “Unexpected” sounds a bit like Ultravox crossed with krautrock, adding a dash of ‘60 southern California cowboy psych. “Holding My Own” is dramatic movie music of the sort Pink Floyd crafted for Michelangelo Antonioni, but it adds a busy vocal line that takes the song in a different direction.

The soundtrack alternates between vocal and instrumental tracks, and on the whole, I give the edge to the non-vocal ones, and they convey more of an air of mystery. “Cultured Memory” is a fine example of this. “Knives” could easily pass itself off as a deep cut from an Amon Düül II record. “A Story in a Story” is a dreamy, contemplative cut that draws the listener inward; the lead guitar work is lovely. “I Don’t Dream Anymore” is a vocal cut that might have worked better as an instrumental, but it still a wonderfully effective piece of musical mood-making.

The collection ends with the most overtly krautrocky track, the nine-plus minute “Des Formes Qui Chagent Lentement.” This hypnotic piece ebbs, flows, surges, recedes, creating a mystical aura with sonic connection to early-early Tangerine Dream. While the whole album is solid, this closing track is the point at which Donovan’s Brain truly fulfills upon the promise of 21st century krautrock.