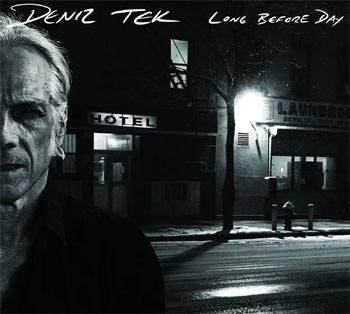 In music, there are a handful of artists who are incorrectly assumed to be form one place while actually being form another. The Bee Gees are thought of as an Australian group, but all three (well, four if one counts brother Andy) were born on the Isle of Man.

Radio Birdman was one of the most important Australian groups of the punk/new wave era, and a key member of that group was guitarist and songwriter Deniz Tek. But he’s from Ann Arbor, Michigan, and he’s an exemplar of the hard-driving rock aesthetic of bands like The Stooges and MC5. Tek wrote or co-wrote nearly all of the music on the band’s 2006 release Zeno Beach. To date, that’s the last studio offering from the group, but Tek has remained quite busy with other project under his own name and beyond.

Tek’s latest, Long Before Day is right in line with the style for which he’s come to be known. Accessible melodies, straightforward arrangement, heartfelt and workmanlike vocals and stinging, barbed-wire guitar are his stock in trade. Across 13 tracks – all but one solo compositions, with the other a cowrite with his Mrs. and guitarist Anne – Tek displays his knowing way with the landscape of rock.

A rhythm section of bassist Bob Brown and drummer Keith Streng (the latter better known as guitarist in The Fleshtones) provides superb, no-nonsense support and Tek tears his way through this impassioned, energetic set of songs. Even though the arrnagements are uncluttered, there’s a grandeur about them, a cinematic sweep that takes the music places beyond the conventional.

Tek’s minor-key delivery imbues his songs with a moody, dangerous edge, and even when his lyrics tend toward the impressionistic, one gets the sense that he’s lived these stories. And beyond just rocking, that’s part of what makes music like this connect with listeners. Let Long Before Day connect with your head and heart, too.