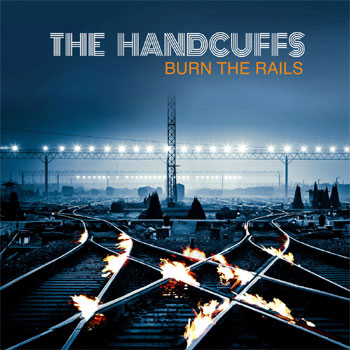 If pressed to name a band that embodied a glam sensibility with the deep and abiding understanding of the rock ‘n’ roll aesthetic, one might come up with Mott the Hoople. At its best, that British group fronted by Ian Hunter created some lasting music. But – save for an aborted reunion tour a few years back – that was a long time ago. Where oh where might we turn for that same winning combination of musical virtues in this, the third decade of the new century?

Happily, I have the answer, or at least one of ‘em. The Handcuffs are a Chicago-based outfit of supreme rock power, sexy swagger and timeless rock quality. Led by wife-and-husband Chloe F. Orwell (guitar, vocals) and Brad Elvis (drums), The Handcuffs have been on my musical radar for many years. But as fine as their previous material has been, little of it quite prepared me for the triumph that is Burn the Rails.

Kicking off with a brief instrumental theme, the album seamlessly shifts into high gear and never lets go. “Love Me While You Can” is equal parts irresistible melody, razor-sharp hookfest and lead guitar showcase. “She Ain’t No Flufffer” is every bit as NSFW as its title suggests, but it’s a far better tune than similarly smutty pop tunes (like Berlin’s “Sex”) could ever hope to be. The music simply stomps, with a character not far removed from Led Zeppelin. But some inventive production and arrangement flourishes take the tune a step or two toward (dare I say it) progressive rock. It’s a tour-de-force.

As superb a leading pair as Orwell and Elvis are, their superb band mates take things to the next level. Jeffrey Kmieciak’s lead guitar work is never less than thrilling, and he takes things unexpected places that work in context. And Emily Togni’s thunderous bass guitar work pairs seamlessly with Elvis’ drums to create one of the most satisfying rhythm sections in modern history.

“Big Fat Mouth Shut” opens with some insistent piano straight off an early Roxy Music LP. Shades of glam-era T. Rex inform the tune, but as ever, The Handcuffs distill their inspirations into something that – while it feels familiar – is always unflinchingly original.

Even when the group dials down the intensity – as on “Let’s Name Our Children” – they still smoke. Tunes like “The Ballad of Fritz and Zoom” employ Alison Hinderliter’s malevolent Mellotron and analog synth textures, and the result out-Hearts prime-era Heart.

The title of the compact “I’m Happy Just to Dream With You” might suggest The Beatles, but the song itself has more in common with Roy Wood’s Wizzard. “Pretty Pretty” rocks as heavily and as hard as Machine Head-era Deep Purple, with a showy, splashy arrangement that seems designed for arena-rocking. Again, Hinderliter and Kmieciak impress mightily.

“Come On Hey Hey” has a feel not unlike Spirit; it’s catchy on the surface, but dig deeper and the track reveals all manner of nuance and power. And Orwell’s fiery saxophone work is thrilling. She applies similar textures to “Dancing with the Dandies.”

Perhaps the album’s most radio-ready (if such a term has any meaning today) is “I Cry for You.” Like every single tune on the record, it has all the necessary elements for success, all packed into a pop song. “The End of the Party” shifts back and forth between two very different styles, but somehow it works; rocking and sophisticated at once, it has a character that fans of Queen will appreciate.

The album ends on a vaguely sinister note with “Tobogganing,” a nearly-one-note jam full of guitar squalls, clattering dissonance, crosstalk and found sounds. It’s a delightful mess, and somewhat counter-intuitively, it’s the perfect way to close a flawless album.

As I’ve mentioned, I’m a longtime admirer of The Handcuffs’ work. But with Burn the Rails, the group has upped the ante so significantly that I wonder if they haven’t just created the finest work they’ll ever produce. This record is certainly the best they’ve done so far. It’s certainly shortlisted for my Best of 2022 roundup, and hey, it’s only July! (Great cover art, too.)