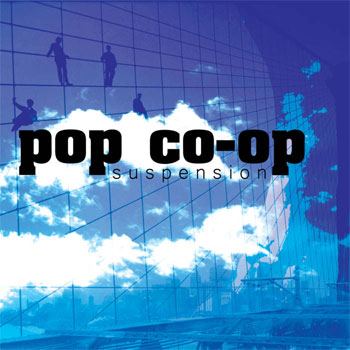 Notwithstanding the admittedly impressive technological advances that have made remote collaboration possible, a strong and persuasive case can be made asserting the superiority of music recordings made when all participants are in the same physical space. Words like “immediacy” and “organic” are often used to underscore the assertion that there’s really nothing quite like being there.

And while I find myself drawn to that argument – in nearly all cases, my ears can detect when a recording has been in made that old-school manner – intelligent and creative use of technology can (and sometimes does) result in finished works of value and authenticity. The need to “grade on a curve” when considering music made this once-removed way is becoming less urgent; the best among such works are the equal of their old-school counterparts.

I mention all this as a way to approaching Suspension, the third and latest offering from Pop Co-Op. A collective featuring four musicians, each of whom writes, Pop Co-Op is the exception that proves the rule about remote recording. With its members scattered across the United States – North Carolina, Virginia, Florida and California – the group nonetheless fashions cohesive, compelling music.

The group debuted in 2017 with Four State Solution (reviewed here) and returned in 2020 with Factory Settings (reviewed here in detail). That second record built on the creative foundations of the first, and the result was an even-better album. As I observed near the close of my review of Factory Settings, the group’s music doesn’t fit neatly into the power pop bag, but it all qualifies as pop when one employs a broad (and wholly non-pejorative) understanding of the term.

The jangle of songwriter/multi-instrumentalist/singer Steve Stoeckel’s band The Spongetones would seem to be a handy reference point, and the textures of the opening/title track do bear some similarity to that group. But the inspirations for the winning tune clearly extend beyond the Beatles; I hear bits of Small Faces and other proto-Britpop acts in the virtual grooves of the song. The vocal harmonies (by Stoeckel, guitarist Bruce Gordon and drummer Stacy Carson) blend together wonderfully and give the group a sizable chunk of its unique character. Gordon is credited with vocal arrangements, and deserves copious praise for his work here. And Carson’s shuffling drum work on the track is exactly what the song needed. Joel Tinnel’s backward guitar licks transport the listener back to /66, and it’s a lovely trip.

“I Just Love to Watch Her Dance” is a McGuffin: it starts off a gentle acoustic piece, quickly shifting gears to sound like new your favorite track off Rhino’s Nuggets II: British Empire and Beyond. Its virtues are myriad, but again: those vocals, that astounding guitar work, those drums. Just… wow.

“Air Heart” movers a bit closer to Spongetones territory, with a melancholy Merseybeat meets Monterey Pop character. It’s a lovely, well-wrought tune, and serves to remind listeners that Pop Co-Op is not about one musical thing; versatility and variety are backed into the recipe.

The impressive “Short Fuses” applies acoustic guitar as a credible rock instrument in a manner reminiscent of ‘60s Pete Townshend. There are some vaguely Indian (as in Help! or Wonderwall Music) threads in the arrangement, but they’re used an ingredients in a complex recipe.

Music Hall was always part of the British pop psyche; that’s a characteristic which sets it apart form its North American counterpart. But Stoeckel is happily immersed in those influences with “In Love With Nonsense.” Some judiciously well-placed horn work makes the song even better. And for those with a deep love of wordplay, this song will delight.

“Out My Window” is a surprise, with a stuttering, electronic beat that initially suggest krautrock. The song suggests what Peter Gabriel might sound like if he had a more finely-tuned pop sensibility. But passengers, secure your whiplash collars: “Run and Hide” is all clattering dissonance, sort of ‘80s new wave meets postpunk grunge. And it’s all brought together with an understanding that melody is key.

Pop Co-Op aims to keep listeners on their toes. The bracing and wonderful (if wholly unexpected) detour of “Run and Hide” is followed by a gentle acoustic guitar-and-woodblock number, “The Odd One.” Flashes of baroque pop (see also: The Left Banke) add to the song’s arty character, but again, accessibility is always a foundational component.

“Unquestioningly I-95” takes the music in a roaring, modern alternapop direction. Those who luxuriate in the music of bands like Material Issue, Cheap Trick, Flashcubes, Matthew Sweet et. al. will dig this one. And again, it’s the little things: the tune is solid enough even before an inspired middle eight takes it into the stratosphere.

The simmering “One Last Dance” showcases an edgier side of the group. Once again: those soaring lead guitar licks! Mid-song the lead vocals reveal more Southern Rock character, and while that quality is a bit unexpected and jarring, it doesn’t detract.

“She Dreams of Horses” is, as its title hints, a dream, contemplative jangling tune with just the right tinge of melancholy. The chirpy “Ghost Heart” features a wonderfully busy drum pattern and crystalline keyboards. Stoeckel’s peerless bass playing rarely calls attention to itself, but it deserves an especially close listen here. The acoustic guitar solo is a treat.

The album’s overall wistful tone is exemplified by “Why Didn’t We?” the song on Suspension that sounds most like a Spongetones outtake. It’s easy to imagine welling up with tears upon hearing this song performed live.

It’s cliché now to note that an album made in recent times was created under difficult circumstances. The pandemic has (and continues to) touch all of us, and often in unwelcome ways. But Suspension was made against the backdrop of tragic loss: Spongetones drummer Chris Garges – friend to the group and many others, and a musician of preternatural talent – passed away during the period when Pop Co-Op was making this record.

And so it’s fitting the Steve Stoeckel’s tribute to his friend and colleague, “Always in the Past” closes this flawless record. The song is personal and universal at once; one needn’t have known what a fine person Garges was to appreciate his loss, and the song is as fine a tribute as can be imagined. And Stoeckel – one who can always be counted upon to get the details just right – creates an arrangement that gives the drums the final “word” on the album. That, too is a lovely, wordless way to tip the collective hat toward Garges.

The only thing that could possibly improve Suspension would be news that the far-fling group might consider plans to convene in the same physical space to play live for fans. But absent that, the way they work is yielding such quality that it almost seems unfair to give voice to such a wish.