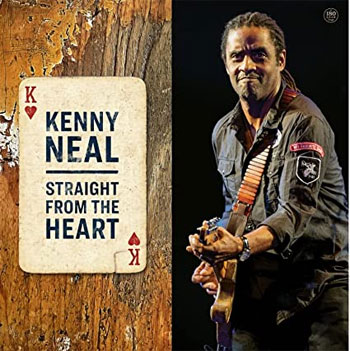 Kenny Neal’s Louisiana roots have always informed his music. Right from the very start he made his origins a significant part of his musical approach. When his indie label debut Bio on the Bayou was reissued on Alligator, it bore the title Big News from Baton Rouge!! Later releases like 1992’s Bayou Blood and Hoodoo Man (1994) offered further explorations of the Louisiana character of his brand of blues. But Neal’s latest is among his most personal offerings, and the set most steeped in hometown character.

Recorded in Neal’s hometown of Baton Rouge, Straight from the Heart combines the guitarist’s many assets – strong and heartfelt lyrics, commanding yet understated guitar work, superb musicianship – with a musical character that can only come from the Bayou State.

Leading off with “Blues Keep Chasing Me,” a song Neal wrote in honor of Lucky Peterson (his best friend and longtime musical comrade), Neal serves up a tasty menu of 11 songs that dig deep into the Louisiana textures that suffuse his music.

Rockin’ Dopsie Jr. adds his distinctive washboard to two cuts (“Louise” and “Bon Temps Rouler”), and his band The Zydeco Twisters immerse Neal’s blues in a soulful and tasty Cajun stew. Christone “Kingfish” Ingram joins Neal on “Mount Up on the Wings of the King,” a tribute to B.B. King co-written by the two guitarists. Tito Jackson shares lead vocals with Neal (plus Neal’s daughter Syreeta) on “Two Timing.”

Neal pays tribute to his other influences as well, bending the inspiring work of Albert King (“I’ll Play the Blues for You”) and Junior Parker (“Someone Somewhere”) to his own needs. In doing so, Neal deftly balances his own creative expression with honoring his inspirations. The arrangement for his reading of the Parker tune is based in part on the way that Neal’s father played it in his own band many years ago.

His new recording of the Albert King classic nails the vibe of the original – right down to the brass arrangement – while avoiding slavish imitation. Because Kenny Neal doesn’t need to imitate anyone else’s style. His own cool, assured fretwork is sonorous, soulful and slinky, making its musical points without flash; his approach always emphasizes substance over style (though he has plenty of the latter).

Together, Neal’s voice, guitar and assured blues harp work form the album’s sonic center of gravity; ably supported by a core band of close associates and family (including bassist Darnell Neal), Straight from the Heart feels organic and real. And the vibes from a neighboring state figure into the mix as well: there’s a strong Memphis Horns character throughout. Notably, those memorable and well-placed horn arrangements are by Neal himself.

Straight from the Heart is Neal’s first album since 2016’s Grammy-nominated Let Life Flow, and it underscores the fact that 35 years after his solo debut, Neal remains at the top of his game.