Danny Boyle’s new FX miniseries Pistol has brought legendary punk rock group the Sex Pistols back into the public’s mindset. But in terms of the band’s importance and influence, they never really left.

Formed in 1975, the Sex Pistols didn’t invent punk; NYC’s Television and the Ramones were among a coterie of groups making brash, stripped-down high-energy music a year earlier. But outside the hip musical cognoscenti, all were unknown. 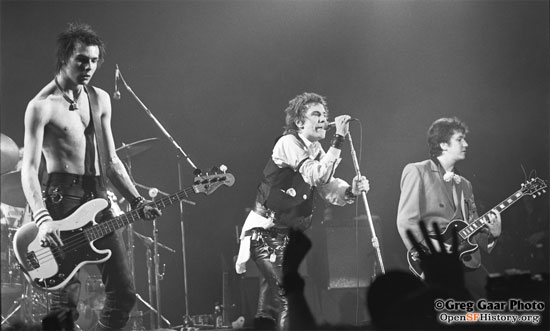 Across the Atlantic in England, and with the help and direction of self-styled svengali Malcolm McLaren, the Sex Pistols would create their own compelling take on the new musical style. From the start, the Pistols recognized that media and image were at least as important as the music; from their clothing and hair to their public statements, they cultivated outrage at every turn, building an ardent following along the way.

Released in November 1976, the Pistols’ debut single “Anarchy in the U.K.” was a blast of fury and a poke in the eye of the establishment. May ‘77 saw a second single, the confrontational “God Save the Queen,” released to coincide with Queen Elizabeth’s Silver Jubilee. Banned by the BBC, it nonetheless stormed to the top of the charts. Punk had gone above-ground.

Chris Knab knew the album would be popular among his clientele at San Francisco’s Aquarius Records (itself the subject of a 2022 documentary); he scored two boxes of the band’s LP Never Mind the Bollocks, and Aquarius quickly became the Bay Area’s exclusive source for the record. (In a punky turn of events, after selling all of the copies in a matter of hours, Knab was robbed at gunpoint and lost all the filthy lucre.)

Perversely, when the band mounted a brief U.S. tour, they scheduled most of their shows in unlikely locales: Memphis, Baton Rouge, Tulsa and the like. The final date of that nine-day adventure would also be the group’s final performance before splitting. Taking the stage at Winterland Ballroom on January 14, 1978, the Sex Pistols lit a fuse that would ignite a local music scene.

Two local punk groups – the Nuns (with a pre-fame Alejandro Escovedo) and the Avengers with vocalist Penelope Houston – opened the Winterland show. (Negative Trend – a band featuring members who’d go on to form Flipper – took to the stage after the Sex Pistols, by which time most in the audience had left. They never got to play.)

It was an event, one that would serve to galvanize scores of nascent Bay Area punk rockers. Having attended the show became a badge of honor. And the Sex Pistols’ sound, attitude and look would inspire many in the Bay Area to chart their own musical paths. Existing bands like Crime, Negative Trend , the Dils and the Offs found validation for what they had been doing, and new groups (Dead Kennedys, Romeo Void, U.X.A. and many others) sprang up in the wake of the Pistols’ Winterland gig.

The Sex Pistols burned brightly and briefly. Singer Johnny Rotten concluded the Winterland performance and signaled the end of the band as he simultaneously invented the mic drop: “Ever get the feeling you’ve been cheated? Good night.”