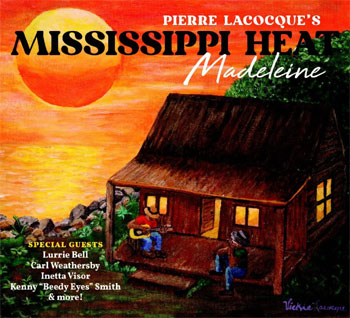 On the surface, little about Pierre LaCoque’s background would have foreshadowed the musical path he would pursue. Born in Israel to Belgian parents, he grew up in France, Germany and Belgium. But encouraged by his parents, he developed an interest in music at a very early age. That interest truly blossomed when his family moved to the U.S. during his teenage years. Coming of age in Chicago, LaCoque was inspired by the city’s rich blues tradition. He developed his skills on harmonica, but didn’t pursue music full time until completing college.

In 1991 LaCoque put together Mississippi Heat, and the band self-released its debut, Straight from the Heart in 1992. Three decades and twelve albums later – and after a run that included a string of albums on Delmark – Mississippi Heat returns with Madeleine, again released on the band’s own label.

And while some things have changed in the thirty years since the group’s recorded debut, many of the important qualities and characteristics remain firmly in place. LaCoque writes nearly all of the material, wails soulfully on harmonica, and leads the band. On Madeleine, the foundation of the music is supplied by the rhythm section of bassist Brian Quinn and (on most of the record’s 12 tunes) drummer Terrence Williams.

Save for its leader, the group’s lineup is completely different from that first disc, but Madeleine does feature a number of guests and Mississippi Heat alumni, including Lurrie Bell (vocals and guitar), drummer Kenny “Beedy Eyes” Smith and Carl Weathersby (guitar and vocals). Vocalist Inetta Visor and guitarist Michael Dotson – both longtime members of the group – each contribute an original song, and ace pianist Johnny Iguana guests on three tracks.

The energy level is high throughout Madeline. The rollicking “Silent Too Long” (featuring Weathersby on lead vocal) sets the tone for the album. LaCoque chugs along on blues harp right alongside the singer, but does so in comparatively understated fashion. Then, after Dotson peels off a sharp solo, the band leader blows with abandon. As the song races toward its conclusion, it’s all-in instrumentally, with a break for Christoper “Hambone” Cameron to tear things up a bit on the B3.

And that’s a fine formula, one that serves the band well throughout the set. Elsewhere, LaCoque trades phrases in musical conversation with the lead vocalist, as he does when joined by Daneshia Hamilton on “Batty Crazy.” LaCoque’s wonderfully overdriven harmonica solo on that tune is a highlight of this new collection.

There’s a rocking, reggae feel to “Havana En Mi Alma,” a tune dedicated to the bandleader’s Cuban-born spouse. Stylistically, though, that song is an outlier on Madeleine; most of the tracks are straightforward blues, generally informed by the urban Chicago style. “Nothin’ I Can Do” is a sprightly jump blues, with LaCoque’s harmonica out front. A horn section adds texture to several tunes, including the New Orleans-flavored “Empty Nest” and “Ridin’ on a Hit.” Reminiscent of NRBQ, the latter showcases fleet-fingered keyboard work from Iguana.

The album’s most subtle and heartfelt moments come during the title track, an instrumental showpiece dedicated to the memory of LaCoque’s grandmother. There are no weak moments on this consistently entertaining, thoughtfully produced release; creating it is a fitting way to mark the 30th anniversary of the group, and listening to it adds to that celebration.