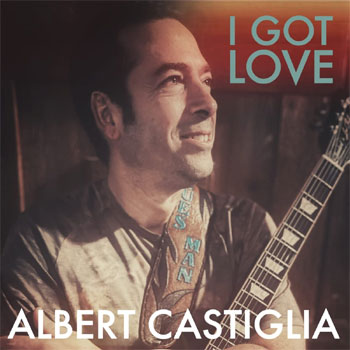 Some blues-rock artists compromise their music to the point at which it satisfies neither blues purists nor rock fans. Admittedly, it’s a tightrope to walk: crafting music imbued with the authentic spirit of the blues while delivering the arena-sized vibe that characterizes much of the best rock is no easy feat.

Yet Albert Castigila is a master of this approach, and his execution is so natural that it feels effortless. He spins out fiery lead guitar riffs and melody lines, while singing in a style that recalls Mick Jagger in his prime. There’s no artifice in songs like the opening title track of his 13th and latest album, I Got Love. And on cuts like “Don’t Pray with the Devil,” Castiglia churns out incessant bursts of stinging guitar while sharing lyrics that concern well-worn blues subject matter.

Castiglia’s songs are jam-packed with instrumental firepower, but they’re fully-developed compositions, not mere vehicles for six-string pyrotechnics. On “Burning Bridges,” he alternates deftly – within phrases – between vocal lines and guitar licks. In his efforts he’s aided in great measure by a taut, muscular and thrilling rhythm section. Ace bassist Justine Tompkins joined his band in 2019, and I Got Love marks the studio debut of a lineup that also includes Roomful of Blues drummer Ephraim Lowell on drums. Tompkins and Lowell provide backing vocals as well.

Lewis Stephens subtly adds Hammond B3 organ and acoustic piano – the latter most notably on the rollicking “Long Haul Daddy” and the searing set-closer “Take My Name Out of Your Mouth” – but at its core, I Got Love is a roaring blues power trio affair. “Long Haul Daddy” showcases some stinging slide work, displaying Castiglia’s multifaceted prowess on the electric guitar.

Albert Castiglia’s expressive voice doesn’t vary in texture much between songs. His guitar work is another thing entirely: his tone and guitar voicing is fine-tuned to fit the demands of each and every song. That means that for “Sanctuary,” he employs judicious use of effects on his lead guitar part while keeping his rhythm guitar sound clean and straightforward. “Depression Blues” finds the guitarist dusting off his wah-wah pedal to add a heavy retro vibe to the proceedings. The stomping “Freedomland” underscores the fact that one needn’t play at a fast pace to convey passion and urgency.

Like nearly all of I Got Love’s 11 tracks, “Double Down” is an original Castiglia composition, but it evokes comparisons to the high-powered blues-rock of Jimi Hendrix covering Earl King’s classic “Come On.” But while Castiglia’s songwriting can evoke memories of classics, his songs never feel like retreads; he skillfully balances respect for blues tradition with a clear urge to rock, and rock hard. Throughout I Got Love, Castiglia is chameleonlike, changing his tone colors effortlessly. His style is so varied that the record can at times sound like the product of not one but three hotshot guitarists. But his strong vocal work is the glue that holds everything together.

While some blues-rockers are leave both kinds of fans wanting, with I Got Love, Albert Castiglia delivers on all counts.