Note: This is the second of two features (originally written for two different publications) focusing on the June 2022 Blue Ridge Guitar Camp and Celebration. — bk

Though he’s closely associated with the Nashville session scene, bluegrass/Americana musician and songwriter Bryan Sutton is a Western North Carolina native. He’s also a Grammy nominee and ten-time IBMA Guitar Player of the Year. And amid his busy schedule – he’s a first-call multi-instrumentalist who has played on countless sessions and released six solo albums – he has made time to return home to host the inaugural Blue Ridge Guitar Camp at the Brevard Music Center.

The camp is a five-day immersion in acoustic guitar, and features a who’s-who lineup of musicians. Sutton explains that the initial impetus for the camp came a few years ago. “The seeds were planted by [Steep Canyon Rangers guitarist] Woody Platt and John Felty,” Sutton says. 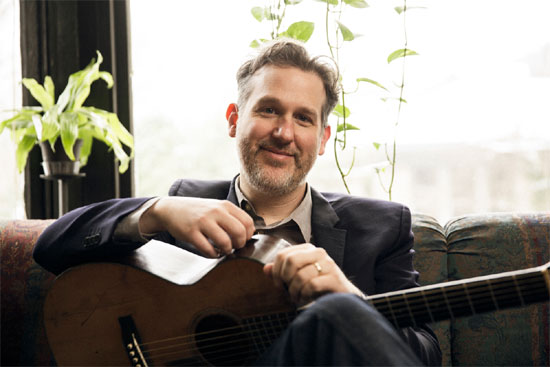 He notes that while the BMC has long been closely associated with classical music, that’s changing. “One of the cool things that’s happening these days is that campuses like Brevard Music Center are opening their doors more to different kinds of music,” Sutton says.

Attendance at the camp is limited to 100 participants, and that’s by design. “I’m a fan of small class sizes,” Sutton says. He’ll be one of five instructors, joined by Courtney Hartman, Michael Daves, David Grier and Grant Gordy.” And the program will go well beyond what Sutton jokingly describes as, “Here’s how you play a G chord.” Dana Bourgeois will educate campers on the finer points of guitar construction. “Guitar players spend a lot of time thinking about their instrument,” Sutton observes. “And part of learning to play guitar is learning more about the guitar itself.”

After several days packed with discussion, workshops, instruction and fellowship, the camp will culminate with a musical celebration, a ticketed event that’s open to the general public. “It’s an opportunity to expanded the ‘camp concert’ into a bigger [event],” Sutton says, “inviting some outside people in and using the guitar concept to show people what the event is all about.”

“We’ve [also] got Molly Tuttle, who has a new record [Crooked Tree],” says Sutton. He’s excited to see and hear her onstage with her band Golden Highway, but that’s just the beginning. “The opportunity to hear her sing something with Courtney and Shannon is too good to pass up,” he says. And that sort of spontaneous collaboration is very much in the spirit of the camp and its celebration concert. “My goal is to take advantage of those collaborations,” Sutton says, “whether it’s a stage full of people or just two or three people on stage doing something unique.”

The Celebration will occupy what Sutton describes as the “sweet spot” between a tightly-choreographed variety show and a free-wheeling evening of musical match-ups. “It’ll be fairly mapped out,” he explains, “with a continual variety of things happening. It’s almost like, ‘I’ve got these great ingredients; what can I cook up that will be entertaining and meaningful to anybody who’s in the audience?’”

Thanks to his status as an in-demand collaborator and supporting instrumentalist, Bryan Sutton has prior experience working with every single one of the musicians on the celebration program. “I’ve been playing with Jerry Douglas since the late ‘90s,” he says. “And I’ve been fortunate to be around Peter Rowan quite a bit over the years, working on records with him.”

Owing to pandemic-era postponements in 2020 and ‘21, this year’s celebration is being billed at the first annual event in an ongoing series. And Sutton is optimistic about the future. “I hope it gains momentum and becomes a destination for folks, something they look forward to like a festival,” he says. The celebration is being marketed as the musical component of the popular annual White Squirrel Festival.

While there aren’t plans to create a video of the celebration for potential release, Sutton says that the concert will be recorded “for posterity and archival purposes. “But,” he teases, “you never know what’s going to happen.” And not that Sutton needs it, but that prospect provides a bit of additional motivation. “I think that’s part of the fun and challenge for me,” he says. “To curate enough special moments on stage that it would be nice to have [a document of the concert] down the road.”