For Primus’ Les Claypool, Rush is ‘Closer to the Heart’

Formed in 1984 by bassist Les Claypool, Bay Area prog/metal/alternative band Primus has long since established its own bonafides as an original outfit, with nine albums of original music to the group’s credit. And Claypool’s creative impulses extend beyond Primus: he has toured and released albums by and with Oysterhead, The Frog Brigade, The Claypool Lennon Delirium (with Sean Lennon) and other acts. But for the group’s current tour, Primus is adding an entire suite of music by Rush to its set list. On 2022 tour dates, the group will perform the Canadian progressive trio’s 1977 album A Farewell to Kings in its entirety.

Claypool emphasizes that this isn’t the first time he has performed other artists’ albums start to finish. “I did Pink Floyd’s Animals years ago with Frog Brigade,” he notes. Claypool says that he and his Primus bandmates Larry LaLonde (guitar) and drummer Tim Alexander have long wanted to pay tribute to the influential group that folded in 2018. “And Kings seemed like the right one,” he says. 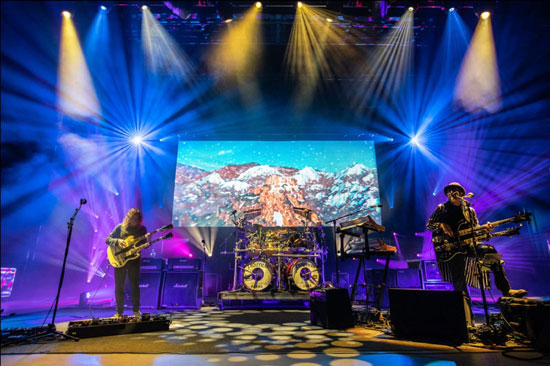 In fact A Farewell to Kings was the first Rush music Claypool ever heard. He has recounted the story countless times: at age 14 he attended Rush’s concert at Cow Palace, with Pat Travers opening. “I drank three warm Löwenbräus and threw up in the parking lot,” he says with a chuckle. “That was fun. I could probably do four Löwenbräus now.”

But he still enjoyed the concert. “It was a mind-blowing thing,” Claypool says. “It set me on a path of Geddy [Lee] worship.” It was right around that time that Claypool first picked up the bass guitar; today he’s widely acknowledged as one of rock’s premier bassists.

And Claypool’s admiration for the music of Rush has endured. “I don’t think Neil [Peart] gets the due that he deserves. His lyrics were very kind of Dungeons and Dragons-y, but there were a lot of interesting metaphors, and they were pretty prophetic and philosophic.” Claypool laughs and acknowledges that when he was growing up, Rush fandom was “like being a Trekkie: not a lot of people understood, but those who did were very passionate about it.”

Primus is renowned both for its musical playfulness and its technical precision. That latter quality is required to play the demanding music of Rush as well. Claypool observes that when covering the music of some artists, there’s plenty of room for interpretation. “But with the Rush stuff,” he says, “you have to nail it. You have to play it as close [to the original] as you can.”

When it comes to vocals, it’s a different story. In 1979 Rolling Stone memorably characterized Geddy Lee’s voice as “a cross between Donald Duck and Robert Plant.” While Claypool doesn’t endorse that particular description, he allows that singing like Lee is “extraordinarily difficult.” So he does it his own way.

Even with a bit of instrumental stretching-out, A Farewell to Kings runs less than 40 minutes. That leaves plenty of time in a Primus setlist for some of the band’s beloved catalog material. And the hard work preparing for this tour also inspired the band to create new music. “We rehearsed this Rush album more than anything I think we’ve ever done,” Claypool says. “And it kind of got the creative juices flowing.”

Perhaps inspired by the album’s two extended set pieces “Xanadu” and “Cygnus X-1 Book I: The Voyage,” Claypool wrote a new epic-length tune of his own. Released in April, “Conspiranoia” clocks in at a lengthy 11:39, charting a twisting, progressive path all along the way. “The notion of a long format tune was something I’d wanted to do for a long time,” Claypool says, noting that he felt that “subjecting people to a bunch of new material when we’re already doing the Rush material” might be a bridge too far. So one new long tune – instead of an album – is Primus’ chosen path at this moment.

“We’re at that point in our career where no matter how many new things we put out, people say, ‘We want some new stuff!” Claypool says. “But when all is said and done, when they come to the show, they want to hear a lot of those old tunes.” He understands that; he says he felt the same way when he went to a Rush concert: “I want to hear ‘Cygnus.’ You know?” And on the current Primus tour, fans get that and more.