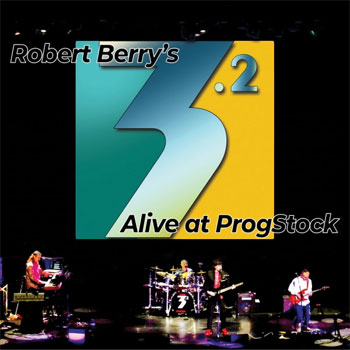 Most music fans know of Keith Emerson for his work with Emerson Lake and Palmer. The progressive supergroup scored a succession of hits and well-regarded albums through the 1970s. Sure, naysayers point to them as part of the so-called “dinosaurs” that punk is thought to have saved us from, but the truth is far more nuanced. At their best – and often – ELP rocked with fire and passion.

But Emerson did more than just play with Greg Lake and Carl Palmer. His work in The Nice (pre-ELP) was impressive, and in the years after ELP’s initial run, he made music on his own and with a group called 3. (I’ll refer to that group here as Three because it reads a bit better.)

Three was a kind of successor to ELP, with Emerson and drummer Palmer joined by an American vocalist and multi-instrumentalist, Robert Berry. They would release only one album, 1988’s To the Power of Three. Released at a time when progressive rock was somewhat out of fashion, it performed modestly in the marketplace. Reviews weren’t kind, which is unfortunate; the group had its strengths.

Many years later, Emerson had plans to reunite with Berry for a followup. That didn’t happen, and of course Emerson left us in 2016. Berry picked up where the project left off and made, essentially, a solo album using the name 3.2 (“Three-point-two”).

Berry has also been involved in a number of progressive tribute projects, making him something of an American Billy Sherwood. Those two pursuits – 3.2 and his skill at interpreting the work of other prog heroes – dovetail on a superb new album (2 CD + DVD), Alive at Progstock. Credited to Robert Berry’s 3.2, it features a four-piece band that includes Berry, lead guitarist Paul Keller, keyboardist Andrew Colyer and (from Spock’s Beard) Jimmy Keegan on drums.

The set list is a tasty mix of tracks from Three’s slim catalog (the multi-part suite “Desde la Vida” and “You Do or You Don’t”) alongside later 3.2 material (“Powerful Man”) and an intriguing selection of covers. In a fair universe, Berry’s “Can’t Let Go” – included here in a soaring live version – would have been a smash hit; anyone who likes Asia would love it. But as solid as the Three and Three-point-two material is, really, it’s that last category where Berry and his band truly shine.

Not content to reproduce the songs in carbon copy fashion (because, honestly, what’s the point of that?) Three-point-two brilliantly reinvents them. Case in point is a reading of Yes’ “Roundabout.” One might think that there’s only one way to play that song. Or maybe two, if one goes the acoustic route. But this band digs into it with a highly-charged arrangement that is at once recognizable and fresh.

Because the show documented here is a Progstock show, there’s a fair amount of chat between the songs. Prog fans wanted to heard about the tunes, and Berry obliged. While that approach inevitably diminishes the flow of the listening experience for the listener, it makes sense in context.

Andrew Colyer is quite skilled on his own, but in the context of this group his brief is to play like Keith Emerson. This he does, and it’s a treat, with Colyer serving up the sorts of sonic textures that devotees of the virtuosic Emerson will relish. “Somebody’s Watching” is a prime example.

Even back in the day, Three played covers, too. Their reading of The Byrds’ “Eight Miles High” was a bit over the top, to be sure, but it works in the same way that the successor group’s other covers work. Berry’s soaring voice – think John Wetton or Greg Lake with an American accent – is well suited to the soaring, thunderous arrangement. “Eight Miles High” is appended here with a faithful (if tantalizingly brief) reading of Aaron Copland’s (by way of ELP) “Fanfare for the Common Man.”

Sweeping, dramatic orchestral prog is Three-point-two’s metier, and so a cover of Genesis “Watcher of the Skies” is entirely suited to the group. Colyer coaxes all manner of vintage sounds out of his gear – Mellotron-like sounds and so forth – while Keller engages in spirited instrumental dialogue with Colyer. makes his guitar sound like an electric sitar. The band is simply on fire, and Berry makes the vocal part his own, refraining from trying to sound or emote like Peter Gabriel. Eight minutes blows by in an instant. (I haven’t mentioned Keegan much, but be advised that he performs superbly throughout, and his vocal harmonies add a lot to the arrangements.)

The group closes its set with nine-plus minutes of ELP’s classic “Karn Evil 9, 1st Impression, Part 1.” It’s predictably brilliant, and the perfect way to end a set that both honors Emerson and showcases the superb musical interplay of the successor Three-point-two.

Alive at Progstock is one of the most musically satisfying live prog albums in recent memory, and is recommended in the most enthusiastic terms.