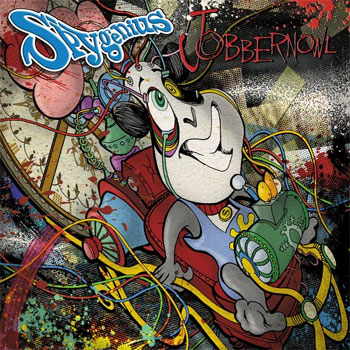 Those Cantabrigian masters of melody are at it again. Jobbernowl may sport an inscrutable title, but the music is accessible in the extreme. Spygenius’ knowing way with ear candy tune creation is showcased once again on their latest release. The wordplay that is a baked-in characteristic of their music crops up immediately: the opening sonic salvo is “I Dig Your New Robes, Pierre.” With retro keyboard textures and straightforward rock/pop feel, the song displays well-integrated absorption of influences including The Beatles and XTC.

But this creative quartet never lets cleverness overwhelm a good tune. The group masterfully balances their witty lyrical inclinations with a fundamental understanding of pop values. The music is timeless: it builds upon sounds of the past while avoiding the retro minefield. People who wrongheadedly say that there’s no music today as good as [fill in your preferred era] simply haven’t spent time with Spygenius. Thier music ticks all the boxes of the sounds that thrilled you in the past, while resolutely planting its metaphorical feet in the here-and-now. Sure, those harmonies in the outro of “Sky-Pie, Century 21” have roots in Rubber Soul-era rock, but then what music of value doesn’t have at least some connection along those lines?

The group’s sunny disposition is leavened with the melancholy jangle of “2020 Revision.” But cheery uptempo rock-pop rears its head soon thereafter with “Son of the Morning, Go Man Go!” The group digs into art-pop with the dreamy “All That is Solid Melts Into Air.” (Yeah, odd and idiosyncratic song titles abound.) The multiple, intertwining melodic lines of “The Marvellous, Mendacious Time Machine” are a Klaatu-flavored delight.

“Mandy Rice-Davies Applies” features irresistible vocal harmonies and a sparkling arrangement. Ruth Rogers steps up to the lead vocal mic for “Screwy,” leading to the question: “Why doesn’t she get more lead vocal spots?” Spygenius’ songwriter and primary singer Peter Watts possesses an embarrassment of riches in that regard, is probably why…but still. (The song’s keyboard work and guitar solos are a treat as well.)

Spygenius always places a high value upon clear, uncluttered yet interesting and layered arrangement. But at the same time there’s a close-in, intimate feel to the sounds; they balance studio precision with a you-are-there vibe. And the music has a character that suggests they could pull it all off live with the same level of precision and verve. Longer, more pensive tunes like “Of Narcissus” (with some nicely understated Mellotron-styled aural textures) are peppered among the uptempo ones.

All previous observations about the group’s soft-pedaling of retro tendencies are rendered moot with the odd set-closer, “Foucalt Swings Like a Pendulum Do.” With an affected lead vocal and a carnivalesque arrangement, it’s a cousin to The Beatles’ “Honey Pie’ and twee tunes of that ilk. If that raises flags for you, Approach with caution. It’s a somewhat unfortunate outlier. But don’t let that detour into English music hall nostalgia put you off: the rest of the album is as solid as rock.