Note: This feature was written as a preview for events that took place the first week of June 2022. — bk 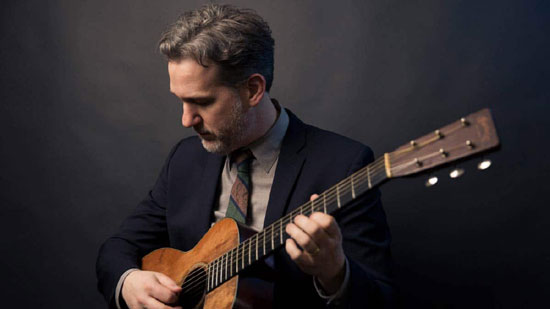 One of the brightest stars in the bluegrass/Americana galaxy is bringing the expertise of top guitarists to a session of learning and collaboration. Billed as the first annual event hosted by Asheville native Bryan Sutton, the Blue Ridge Guitar Camp happens June 1-5 at Brevard Music Center. A separately-ticked event, Sutton’s North Carolina Guitar Celebration leverages the talent on hand for a June 4 extravaganza.

Nashville-based Sutton was inspired by events mounted by like-minded musical friends. He mentions the Steep Canyon Rangers-hosted Mountain Song Festival as well as Béla Fleck’s banjo camp as projects that inform his idea of what his camp should be. Sutton’s camp “has been in the works since 2018,” he says. “We had things up and ready to go in 2020, and then had to shut down because of the pandemic.”

Music camps are commonplace, but Sutton aims to make his program unique. “One of my main goals is to shake up what normally happens at camps,” he says. “We want to try some new programming that’s not like what folks have experienced at other camps.” He observes that a typical camp is “sort of like going to school for a week,” and that’s a vibe he wants to avoid.

“I want folks to experience conversation outside of normal guitar education,” he says. The camp isn’t so much about learning to play new music. “It’s about a new way to look at playing,” Sutton says, “and a healthier way [for guitarists] to examine what they’re already doing.”

Sutton will be joined by five highly regarded masters of their instruments, each of whom will spend quality time with the nearly 100 campers. “My goal is to provide a more comprehensive experience,” Sutton says. “Grant [Gordy] may not cover exactly what Courtney [Hartman] is discussing. I’ve worked with each instructor to sort of create a lane.”

Each instructor’s emphasis builds on their strengths. “Grant Gordy is a great improviser who has stretched the boundaries of bluegrass and jazz guitar,” Sutton says. “So his lane is more about discovering that improvisational voice.” Michael Daves brings a “wealth of knowledge of bluegrass traditions, rhythm playing and singing,” Sutton says.

Guitarist David Grier is a “master of repertoire,” Sutton enthuses. Grier’s instruction will focus on cross-picking, what Sutton describes as “a subgenre of flat-picking.” And Hartman will emphasize “artistry, musicianship and playing with others,” Sutton says. For his part, Sutton’s instruction will explore “mechanics and fundamentals, all in the interest of better music.”

Inevitably, the five instructors’ presentations will intersect at various points. “But a student can expect a different conversation with each instructor,” Sutton promises. “And everybody [who attends] is going to see every instructor.”

The camp will also feature guest speakers leading “deeper conversations about the tradition of bluegrass and flat-picking,” Sutton says. And master luthier Dana Bourgeois will lead campers through “an understanding of guitar construction,” aimed at helping students appreciate “why their guitar does what it does,” Sutton says.

Neurologist Josh Turknett, author of The Laws of Brainjo will explore the intersection of musicianship and the human brain. “It’s basically about understanding your ‘machine,’” Sutton says with a chuckle. “The machine that is you, and the experience of playing a musical instrument.”

The Celebration is envisioned as a variety show, carrying on the proud tradition of historic revues like The Grand Ole Opry and Louisiana Hayride. “There will be a few different setups,” Sutton explains. The main stage will feature larger ensembles, while additional smaller stages will showcase solo performers and “intimate little trios with singers and players around a couple of mics.”

Sutton expects the Celebration to be a nonstop flurry of activity. “There will be people on the side of the stage, ready to go” while other acts are performing, he says. “There will continually be a variety of things happening. My role is to host and curate, and to have fun.” He notes that the Celebration is the musical component of this year’s annual White Squirrel Festival. “That will draw even more people in,” he believes. “A lot of people come to the mountains to enjoy that festival.”

Sutton promises that campers will be involved in the Celebration as well. “My goal is to – some way or another – plug them into the show,” he says. “And there will certainly be a big finale where we’ll try to get as many people on stage as we can, playing a big bluegrass jam.”

Bryan Sutton’s Blue Ridge Guitar Camp is designed to occupy the sweet spot between laid-back and intensive. “I’ve toyed with the question, ‘Should we call this a camp at all?’” Sutton says. “It’s more like an experience, or a summit.” He’s reluctant to use the word ‘intensive’ to describe the five-day event, but admits that “there will be a lot going on.” And Sutton believes that the pastoral setting of Brevard Music Center will contribute to a relaxed vibe.

Sutton says that the camp and Celebration aren’t designed to compete with music festivals, but his long-term plans are ambitious nonetheless. “We want to put together a really solid [program] and an annual event.” Ultimately, Sutton hopes that attendees will “feel relaxed, feel supported in this community, and also be challenged. “There’s a lot going on in this camp that reflects how I’ve learned,” Sutton says. “And how I continue to learn.”