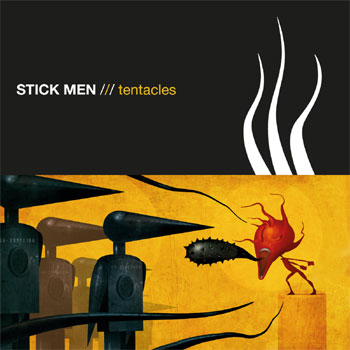 Considering the degree to which each of its members is known for other projects, it’s remarkable that Stick Men even exists. Drummer extraordinaire Pat Mastelotto has been on every King Crimson album and tour since 1994. Bassist/Chapman stick player Tony Levin is one of the world’s most recorded musicians, having played on considerably more than 500 albums in most every genre. Levin has been a member of King Crimson for most of the last 40-plus years. Prodigious Austrian touch guitarist Markus Reuter designs his own instruments, and seems to release new material on a weekly basis. Busy guys all.

The group is sometimes thought of as a King Crimson spinoff, but in truth Stick Men evolved out of a slightly different six-person group of staggering skill and intensity. The Crimson ProjeKct was itself a more or less officially-sanctioned offshoot of Crimson, beginning its time as most of the other so-called ProjeKcts (One through Five, Six, X, 21st Century Schizoid Band; Jakszyk, Fripp and Collins) wound down. Originally billed as a subset of Two of a Perfect Trio (a nod to King Crimson’s 1984 LP), a typical performance would feature Mastelotto, Reuter and Levin playing a set; another set by guitarist Adrian Belew, bassist Julie Slick and drummer Tobias Ralph; and a concluding set featuring all six. They played material from the King Crimson catalog alongside other innovative and challenging material.

Not counting a Levin album Stick Man (recorded in 2007 with a different lineup), the group debuted on record in 2011. Subsequent releases have explored both structured and improvisation pieces; the interplay between the three musicians is preternatural and massively powerful. Unlike some progressive outfits, the music of the mostly-instrumental Stick Men displays a subtle sense of humor. Not like the wacky, sometimes over-the-top Primus, but Stick Men’s music is never ponderous nor dour.

There is a mathematical precision to the group’s work. Mastelotto plays a massive kit equipped with unusual percussion instruments alongside more traditional ones, and plenty of astutely-employed electronic-triggering gear. Levin coaxes an astounding range of musicality out of his Chapman Stick. And Reuter – playing his own touch guitars, a unique take on the Chapman Stick concept – creates otherworldly soundscapes and melodic parts; he can sound like Robert Fripp when he wants to, but he takes the instrument other places as well.

And those other places – musical journeys upon which Stick Men embark – are overwhelming in their emotional intensity. The group balances the head vs. heart conundrum that threatens to sink lesser prog bands. And all of this is on brilliant display on Tentacles, the trio’s first release of new music in several years.

Recorded remotely – this is the pandemic, after all – Tentacles never sounds like a phoned-in recording. The members’ years playing together in and beyond the context of Stick Men has afforded them a near-subliminal ability to communicate, and the interplay among the three of them on Tentacles is fascinating. The pieces are tuneful after a fashion – this isn’t pop we’re talking about here – but inviting, not foreboding. Think of their darker pieces as musical nightmares well worth having.

Available in physical form only at stops on their tour (which ended over a month ago), Tentacles is also available in a digital format. In whatever form one experiences it, Tentacles is a progressive tour-de-force, one that earns the term sometimes used to describe the group: prog noir.