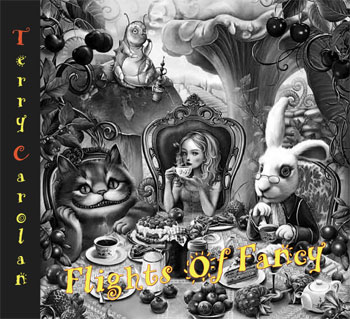 The music of Terry Carolan first came to my attention nearly a decade ago when I encountered a CD reissue of a 1980 self-titled album by his band True Hearts. Some four years later I heard his album Circus of Mirth, credited to Heirs of Fortune. Quite different from that ‘80s music, it was somehow consistent with his earlier work as well, doubling down on Carolan’s knack with melodies of the ear candy variety.

Now he’s back again, this time trading under his given name. Flights of Fancy is filled with chiming, inviting, midtempo pop-rock. All eleven tracks are Carolan originals, and his soaring voice and pop sensibility make Flights of Fancy a consistently enjoyable collection.

Carolan is joined in his musical pursuits by a half dozen or so talented friends, but ultimately the album represents his individual musical vision. The lyrics are heartfelt and personal, yet written in a style that makes them universal in their appeal. And subtle sonic touches like fret-buzzing guitars that suggest sitars are peppered throughout the album. Shimmering acoustic guitars and tight harmonies figure into most of the material. Flights of Fancy is thus recommended.