An edited version of this feature appeared in Mountain Xpress ahead of the festival which took place last weekend, June 4.

Unplugged Nature is a Feature, Not a Bug

The Covid-19 has taken the lives of nearly a million Americans. And two-plus years of a pandemic have exacted a toll even upon those who survive. Extended periods without human interaction have put strain on our emotional and psychological well-being. During the pandemic, many relied even more upon online resources to stay tethered to loved ones, friends and the greater community. Now, presumably with the worst behind us, live music is returning. After a two-year absence, the Cold Mountain Music Festival featured a full day of music from regional and national artists. And the festival’s unplugged nature – no wi-fi, no cell service – encourages community; it’s an opportunity to for folks to get reacquainted and make up for lost time. The Cold Mountain Music Festival happened on Saturday, June 4 at Lake Logan.

The festival began in 2017 as a fundraising project to support the ministries of Lake Logan, including its retreat center, Camp Henry and its outdoor school, says Lauri SoJourner, Lake Logan’s executive director. For the event’s second and third years, programming expanded to two days. The Covid-19 forced the cancellation of the festival in 2020 and 2021; it returns now as a single-day event.

“We made less money with a two-day festival because of the added expenses,” SoJourner explains. “Since it’s a fundraiser for our programs, a two-day festival didn’t make sense.” But the lineup packs a full weekend’s worth of entertainment into eight-plus hours. And for attendees who camp at Lake Logan the night before, SoJourner promises special live music events “with a local flavor” for them as well.

SoJourner notes that there’s no cell phone service at Lake Logan. “And we don’t have great internet, either,” she says with a chuckle. But she emphasizes that those realities are really an advantage. “At Cold Mountain Music Festival: people are looking at each other and looking at the musicians, because they don’t have phones in their faces,” she says. “It’s a strength of the festival that people really immerse themselves in the experience.” 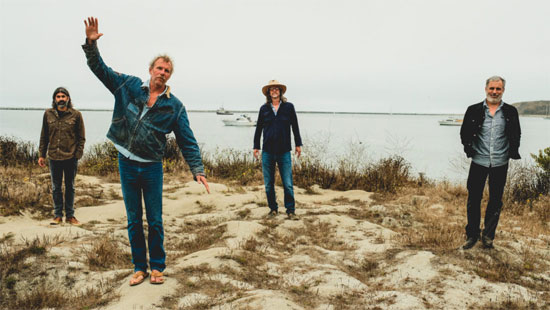 The Mother Hips
Founded more than three decades ago in Chico, California, The Mother Hips have charted a varied musical path; the band’s ten studio albums explore folk, rock, psychedelia, jam and other styles. A popular fixture on the festival circuit in the westernmost states, The Mother Hips are comparatively unknown in the southeast. But guitarist Greg Loiacono says that the group won’t radically alter its approach when meeting a Western North Carolina crowd.

“I don’t know that we will do too much differently,” Loiacono says. “We may be inclined to go with a really strong set of our favorites to play, songs that seem to be more widely received.” The set is likely to include at least a few numbers from Glowing Lantern, the band’s latest record released last December.

Like many groups, The Mother Hips took advantage of pandemic-imposed time away form the stage to focus on the making of the new, self-produced album. “We have typically used an outside producer or co-producer,” Loiacono says. “And that has worked well. But having the time and space to work closely together not only on the writing but on the sonic landscape was really wonderful. I think that helped create an evolved sound that was different from all of our other albums.”

With that album’s release and a followup already completed, The Mother Hips have once again turned their attention to live performance. “Along with every other touring musician, venue and promoter, we have gotten used to the idea that things could shut down at any moment,” Loaicono admits. “But it has felt really good getting back [onstage].” And the band is intrigued by the festival’s slightly-off-the-grid approach: “Playing in a ‘dead zone’ sounds fantastic,” says the guitarist. “These days it seems like a special treat when humans gather in areas where they are unable to use their smart phones.”

Chatham Rabbits
Wife-and-husband duo Sarah and Austin McCombie lead the Chatham Rabbits, a bluegrass/Americana group based in rural Chatham County, 40 miles southeast of Greensboro. Their tuneful, rootsy approach is showcased on the band’s latest release, If You See Me Riding By, scheduled for release one day before the McCombies appear at the Cold Mountain Music Festival backed by a full band.

Chatham Rabbits have seen their profile raised even before the new record – their fourth – hit the record store shelves. In May, a limited television series premiered on PBS: On the Road with Chatham Rabbits documents the couple’s shared lives, filled with lots of touring, farming and songwriting.

Sarah McCombie says that while she and Austin started out each composing songs on their own, they’ve developed into a songwriting partnership. “We’re like, ‘Okay, we’re in this together, so we’ve got to work together. We’ve got to strengthen these songs and sharpen them using each others’ skills,’” she says.

While the couple worked on their farm last summer, they decided to build an open-air barn where they could eventually host concerts. “We started out [allowing] 50 people at a time,” says Sarah. “But it ended up being so popular that by the end of the summer, we had 150 people out to our house each Sunday.” They hope to host additional installments of their Barn Concerts at the Burrow Project during period when they’re off the road.

Sarah McCombie says that the festival’s “condensed” lineup really appeals to her and Austin. “They keep it very ‘curated,’” she says. “And that’s exciting. Plus, the fact that it’s family-friendly is a huge perk for us. And it’s going to be really nice to unplug, not look at my phone or worry about anything else for the whole day.”

A day away from technology
“The atmosphere here is pretty awesome,” raves Lauri SoJourner. She concedes that some might be “taken aback” by Lake Logan’s lack of electronic connectivity, but emphasizes that “the opportunity for music and recreation is a great plus. There’s a great family focus, with activities for everybody.”